My experience with “Klink and Dink” method during river fly fishing

In spring 1996, The World Fly Fishing Championship was held in the Czech Republic and the domestic Czech team won the contest. At that time I did not know anything about competitive fly fishing, but the articles written by Karel Krivanec, which followed the event, opened new horizons for me. I was eagerly reading articles, cut them out from the magazines and glued them into my notepad. Besides successful patterns from the Championship, Karel told me various stories many times. Karel mentioned the fact that Pascal Cognard from France, who was three times World Champion, was fishing for graylings with a dry fly and a little nymph hung under the fly. He called it “to small gallows”, and this was my very first contact with the method that enchanted me.

Today, many of us fish this way and each of us has his own style and uses original patterns. For example, Tomáš and Lukáš Starýchfojtů often use parachute upwing, Martin Musil Jr. likes fishing with the Rock Lady (Rokerka) and Jirka Daněk uses CDC Sedge as a float. In Bohemia, Rock Lady clearly takes the lead also in still water fishing. Caddis, called Tabanas, is very popular around the world.

Although the Rock Lady is a very good fly that I accept, I have never became addicted to it. I was enchanted by beetles. A classic beetle has a body made of peacock feathers and legs from a rooster and with a tip on the back. I have believed in dry beetles since my first river competition, because they are all around the water. For a long time I was looking how to be successful with a “float”, but I did not succeed. But once Jirka Šulc showed me his Sedge that he uses as a float and finally I got an idea. I ignored wings and looked at my beetles, but of course in a bit different way. I tried various options, but beetles were sinking due to the weight of the nymph. However, once I tied beetle’s legs from harder feathers of an older rooster and look - it did not sink and was attractive for fish.

At that time my new job brought me to South Bohemia for three years and to the Vltava River and I was trying it hard there and in those places, where Pascal was fishing at that time with his “small gallows”. After some time, I found that a high-quality lubricant will increase floatability of my beetles. CDC oil by Marc Petitjean is unbeatable and remains on the fly for a very long time.

I was also trying to find how to increase visibility of beetles on the water surface, without reducing their attractiveness for fish. Therefore, I added a small wing of day-glo orange Aerodrywing. Firstly, I placed the small monowing to the fly’s head, but the nymph weighted the fly - float and so the beetle changed its position and the monowing sank under water, which stopped being interesting for fish. It was a great difference compared to the beetle without a tip. I made the tip smaller and placed it into the fly’s centre and it was much better. Step by step, I moved the monowing into the fly’s centre to the last third of the body, where it was better seen after the beetle’s position changed on the surface and fish almost do not mind at all.

I use beetles from the size 12 to size 18, bigger in spring and as the season goes on then I use smaller and smaller. In most waters where grayling does not occur I fish with size 14, Devil rappids on the Vltava - downstream of the Lipno reservoir - the fish like beetle of size 12. Where grayling occurs I use size 16, tie beetles on dry hooks H 130 BL. The body is made of a natural peacock feathers, tip is usually some kind of flash, usually claret shade. The monowing is orange Aerodrywing or another similar material, e.g. by Soldarini company. I also like using two colours for legs, body legs in cree shade and front legs of dark brown rooster. The older the rooster is, the more pointed and sharper crescents are and the more glossy crescents are, the better. The best are winter capes and especially January capes are the best. For beetles size 12 – 16 (Picture No. 1), I use feathers of domestic Czech roosters, because the convergence of their crescents and thickness of legs is the best. Thanks to good convergence of small feathers of the cape we will reach irregular position of legs and you will not reach regular brush. I strengthen ribs on their bodies with a thin nylon line. For beetles size 18, I use branded capes with long feathers (Picture No. 2).

Under the beetles, I use nymphs of the Pheasant Tail type on hooks size 16 – 20 with tungsten bead of the diameter 2.3 mm (Picture No. 3). This one is perfect for me for long casts, because I fish mainly a nymphing leader or even better is a float leader. I do not use flies with a bigger tungsten. I also fish with various options of Orange Tag Nymph in the size 18.

To make the nymph to fly well, I have built a special leader. Into the competition nymphing line (000) I dig red Suffix nylon 210 – 230 cm in length (according to the rod length) and then I add every 35 cm, in descending order, Camoufil line (it has no memory) of diameters 0.25 mm, 0.20 mm, 0.18 mm, 0.16 mm (here I use a strike indicator, but it does not have to be so), 0.13 mm and finish it with a micro ring. Then Stroft nylon of the diameter 0.08 – 0.09 mm follows, but in extremely clear water I use Tiemco nylon. After 60 cm of nylon there is 2-3 cm long dropper branch for adding a “float” and a 50 – 55 cm long tippet for the nymph. I use rods in AFTMA class 1, for larger rivers it is a very fast CTS rod (New Zealand) 9.6 ft. long and for smaller rivers I have changed Hanák Superb XP 190 rod for faster action. I cast with my wrist and rods of the middle action are too slow for me and I have to make them faster.

The set of two flies is casted directly upstream, so that the nymph could be taken by water directly under the dry fly. If you cast slantwise, the nymph is next to the dry fly and a bow is made and you lose lots of strikes. If you want to cast slantwise from you, the nymph has to fall upstream from the dry fly and their tracks must be in one line and not in two. When the fish takes the nymph, the dry fly sinks and it is used as a strike indicator. I fish clink and dink in all weathers, if the river is shallow up to 40 cm, the best are very shallow currents, where it is insurmountable, I only cast at a distance of about 5 m in front of me against the current. Many times I tested it with friends so that first the spot was fished by a classic nymph and then I fished it by K&D. If the river is deeper, then there is nothing to do but use a Czech nymph. 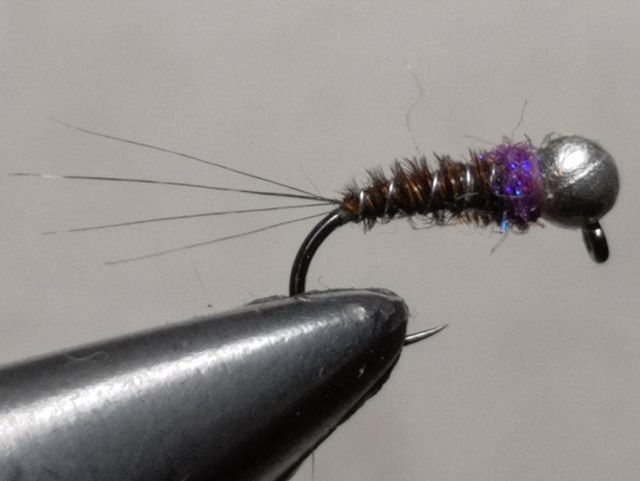