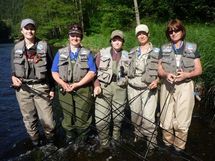 I hope you all know that the 17th European Championship in fly fishing was held in Rožmberk nad Vltavou in June of this year. In the previous years, every nation could sign up two teams for the European Championship. This year was no different except with the small change that the second team had to be ladies. The Czech Republic was the only one to take advantage of this option, thus allowing the participation of our five women in such a big competition. In the relatively long history of international fly fishing competitions, this was the first time that a Czech ladies team competed.

European Championship 2011 or the Czechs at home cannot be beat

From 31 May to 5 June 2011, the 17th European Championship in fly fishing was held in the area around Rožmberk nad Vltavou, attended by 17 teams, two of them Czech (men, ladies). The actual championship was preceded by the preparation of the championship teams that started to arrive from 21 May. According to the presumptions on paper, it was clear beforehand that this would be a duel for the gold medal between the home Czech team and France, leaving the others to battle for the bronze, especially in situations in which difficult venues were chosen for the competition, but with plenty of fish. According to tradition, both the Czechs and the French sent their B-teams to the European Championship. This was all supposed to play into the hands of the home favourites, who were supervised by a group of five international judges from Poland and Holland.

Lire la suite : European Championship 2011 or the Czechs at home cannot be beat

In Praise of Quils

I opened this year’s fly-fishing season on the Warm Vltava River on June 6 when I went there for a trip with participants of  the 2010 Czech Nymphing Masterclass. We had beautiful Spring weather and clear skies with only a small cloud from time to time. The water level was elevated prospects for very good fishing. Rob and I went to my beat located a short distance from Dobrá village; However, although we caught several fish, the catch was by no means as good the previous year.

After about an hour trying various methods we decided to climb the right side of the river and to move to another goodsection of river that flows through Schulze’s meadow. The bank is relatively high and descends steeply into the water. I cast nymphs from time to time as I moved along the bank, but I could not catch anything. So, I reverted to my tried and tested Summer rig with a small goldhead black nymph on the point and a small beige Czech nymph on the dropper. Suddenly it seemed to me that a small circle had appeared on the water surface at a very good place, only a short way from the river bank. I could not swear on it but I stopped and observed the water attentively. I sat down on the bank and thought whether I should change to dry fly. But it was still long before noon, and so it seemed too soon to me. The biggest grayling stay in those places and I did not want to alarm my possible catch. I waited for another rising, but nothing happened.