The second edition of the book about the Czech Nymph came out on 21 November 2007 exactly 8 months after the first English edition and also in its German version. Due to the fact that the first English edition was sold out in September and sixty percent of the second edition was sold within one week there are still several options for other consignments. The sale of the German copies is starting now, nevertheless about 150 pcs have been sold so far. This new edition is rather different from the first one and also a short chapter about the Czech Nymph outside Europe has been added.

The largest interest in the book is currently in the USA, where the 17th International Fly Tying Symposium in Somerset, NY took place between 17 – 18 November 2007 and a large interest was spent on more than an hour long Johan Klingberg´s presentation from Sweden called: History of Czech Nymphing – How to Tie and Fish Them. The author of this presentation mentioned just the first issue of our book as the main source of his information. After the presentation all were running to the book-seller, however, he had only six copies left and then many others were disappointed.

The first week after publishing we were busy with arrangements of orders and books were distributed to the USA, Italy, Austria, South Africa and Germany. We have also received a good news that our consignment arrived in Tasmania after 3 months of sailing. This book has been on sale in Great Britain, Belgium, Netherlands and Finland. Now we are looking for distributors in Switzerland, Scandinavia, New Zealand and Japan. We also consider Italian and French version of the book, but it depends on the fact if we find somebody who would be able to translate the book from English, German or the Czech original.

Both English and German versions of the book you can order through our website. 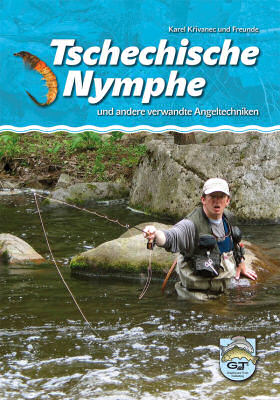