Bronze medallist John Horsey faced flooding and coloured rivers at last month’s World Championship. He tells us how he fared…

WHEN we hear that the 30th FIPS-Mouche World Fly Fishing Champs will be held on the mighty River San in Poland, we can’t wait to tackle this world famous river.

In reality, due to some of the worst storms and floods in Poland's history, the event becomes more of a battle against the elements rather than the fish themselves.

A total of 28 teams compete, making it the biggest World Championship ever.

NOWADAYS, any team wanting to do well in a World Championship must practise for at least a fortnight before the event. On our trip the practice water in Poland is scandalous! The lower part of the Myczkowec Reservoir has no trout! All teams that fish in advance of the official practice session, blank.

For such a huge river, often spanning over 100 metres wide, we've just one practice area in the lower reaches. Normally, in these sectors, the water's warm and coarse fish thrive - trout and grayling are almost non- existent!

When Australia, New Zealand. South Africa, Canada and Japan travel thousands of miles to a Championship and find there's no practice water, then it's a joke. I don't blame the Poles, but I do criticise the FI PS Mouche organisers for allowing this to happen.

THE two days of official practice will be critical. The River San drops to its normal low, crystal clear levels and looks great. Due to massive floods, the hydro system turbines has cranked out huge amounts of electricity, but we are assured that for the next five days, just one turbine will operate and, barring any new rainfall, the river will be perfect for the match.

We have a new piece of practice water on day one and dozens of anglers eagerly wade across the River San below the town of Lesko and hope for trout and plenty of grayling.

I watch a Polish angler practise, he's catching more than the rest of us put together. He's using a long upstream cast, with a bright orange floating line and a pair of nymphs that made hardly a dimple when landing in the water. It's a fascinating style and something that works very well in the knee deep, crystal clear water.

John Tyzack and myself assume that he's using tiny nymphs, fishing them 'upstream and across' while throwing in a downstream mend to set the nymphs. At times he jigs his rod tip up-and-down, then throws in another downstream mend and, finally, allowing the flies to swing below him. It appears that he's fishing nymphs slightly faster than the current and imparting movement that makes the flies rise and fall -something the San fish find irresistible! 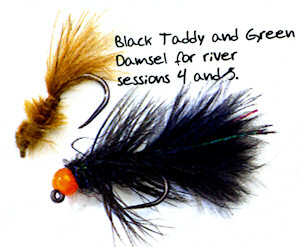 Davie Parker and Ian Greenwood fish the reservoir and amazingly, Davie catches eight brown trout - now they were definitely not there three days previous. So obviously the place has been stocked. We hope there will be more fish in Sectors i and 2, which are a couple of miles upstream of this practice sector.

Another morning of being "up at 0500 hours" and we are to practise again on the River San and the Lake. Howard and I fish the reservoir -1 fish every conceivable line in my short three-hour session trying nymphs, wets, lures and dries. Howard also rings the changes and takes a fish figure-of-eighting a Stealth Tip line with a Black and Orange small Woolly Bugger. I blank!

Simon, Davie and John fish the river Polish style - long range nymphs using either Micro Nymphs or Sedge Pupae. They all catch fish. JT also has a few on dries and Davie Parker a couple using Streamers on a Di-3 line.

WHEN fishing a World Championship, you're on your own. Your team-mates are on other sectors and you can only pass on information at the end of each session. So this is my account of the match.

THIS is the legendary 'no kill' sector and rumours claim you need 30 fish to win the session. I arrive at my beat with 12 minutes to go. In this time, I must tackle up four rods and walk my beat. Fat chance!

I choose size 18 Micro Nymphs in the shallow, clear water and fish a long line, Polish style. Four minutes into the session and I take my first trout - 24.7cms. Too small, it has to be 25cms! After nine minutes, I land a decent grayling and this time it counts.

During the session, I hook seven more sizeable fish and land only one of them. I also play out a big brownie, estimated 3lb, which I follow across the entire width of the river, only to lose it at the net when it head-dives into a weedbed on the far shore, breaking my tippet. I finish isth from 28.

THE morning session produces seven trout for Simon Robinson using a Di-3 lme and a Black or Pink Mini Taddy. The French win it with 17 fish, so there are plenty to target.

I use a Di-3 and an all Black Taddy on the point and change the dropper many times before settling for a small Orange Taddy.

The retrieve is crucial - sometimes they want a figure-of-eight, sometimes in fast, short strips - but never on a long, fast strip. Typical aggressive small browns - they hit it hard and you've got one chance. The hang is also crucial, but hook-ups less reliable.

I catch 16 fish - the most in the session, but somehow Laurent Gagneux beats me with 15 fish. I'm happy with second place.

THE lower reservoir is much harder -13 competitors blank on the previous session, so I want an early fish to "save the blank". Flat calm and scorching sunshine isn't ideal for brown trout fishing! It's not until a breeze develops and we cover some water that fish start to be caught. With half of the three-hour session over, I land my first fish. Just five fish wins the session and my two put me in fifth place.

HEAVY rain and all night thunderstorms mean that the River San is rising and coloured. We all feel that this will be the end of the Championships.

I draw a great beat that has produced nine, eight and four fish in previous sessions - but not in coloured water.

I see a clearer section across the other side, but it will be a dangerous wade. My controller signals that this is the place and that he will tell me if the water rises to dangerous levels - it's now chocolate brown throughout!

I start with a Black Taddy on the point and a Green Damsel / Mayfly Nymph on the dropper, using a Di-5 line. However,

instead of casting down and across, I cast upstream and pull the flies back faster than the current. I try to emulate the action of those smaller nymphs, but on a bigger scale in the flooded, dirty water.

It takes me 47 minutes to take my first fish to the controller and the crossing is eight minutes each time.

I wade back to him another 11 times - and once he rejects a fish as it's 2mm under the 25cm mark! I have 11 brown trout, third place for the session.

THIS is a bit of the River San immediately above a road bridge and is a massive bit of water. I know it's easy wading under normal conditions, but as the water is now completely chocolate brown and racing through, I have to be careful. The thought of even trying to catch a grayling on nymphs has gone and I target brown trout.

As the water's much shallower than my previous beat, I start with a clear intermediate line and the same two flies. Would they see them in this filthy water?

After 30 minutes, a fish rises to one of the thousands of mayfly hatching.

I cast my Taddy/nymph combo over it and it nails the nymph! I pray for that fish to stay on the barbless hook.

It did and three more join it on the controller's measure that session. 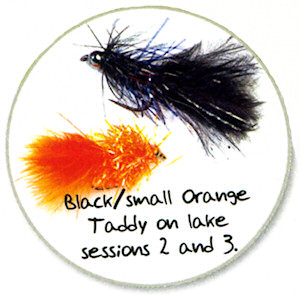 I catch everything upstream and above me and change to a Di-3 line as the water grows more powerful. Most of the others fish down-and-across and the fish don't want it!

Another third place for me, and the Pole and the Frenchman blank on my sector.

UNBELIEVABLY, I finish in third place and win my first individual medal in a World Championships. Last year in the European Championships in Ireland I won silver and was beaten into second place by Pavel Chyba of the Czech Republic, who is now the new World Champion!

England finish nth and are disappointed, but everyone fished his heart out for his country.