Between 11 and 17 August 2013, The 33rd World Fly Fishing Championship was organized near the town of Mosjoen, Norway. This time 125 competitors from 27 countries took part in the championship and 25 teams were classified in the team competition. Very low number of fish caught was a typical feature of this championship. It was expected and leading teams were mentally well prepared for this fact, because often happened that only one fish was caught during three competition hours. Altogether 669 pieces of fish were caught and this means 5.32 fish per 15 hours of fishing per competitor and this means a bit more than 1 fish per a three-hour session.

We can assess the sector No. 1 on a big river Vefsna as a fair venue. It provided 305 fish (45.6 % of all catches) for competitors. Main species was grayling and brown trout. Fishermen used intermediate lines and nymphs (plus a small streamer) drawn upstream or in faster streams the nymph with the French leader. Three of Czech competitors were successful there – 3rd L. Roza (13 pc), 8th P. Chyba (2 pc) and 8th M. Drož (1 pc); T. Pešek and J. Adam blank remained. Paradox, this river venue was the worst for Czech competitors. Their total sum of placings was 69 points. Italians and French had no blank scores there. 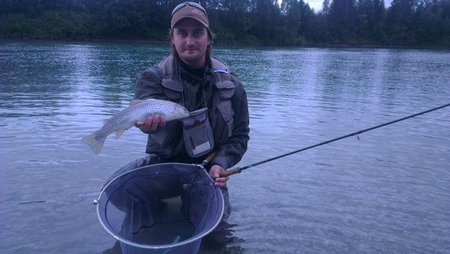 Altogether 164 fish (24.5 %) were caught in the middle river Austervefsna (sector 2). From the Czech team the most catches had Roza (6 pc) – 3rd place, Adam won the sector with 5 catches as well as Drož (2nd place), Pešek had 2 fish (4th), and only Chyba was blank there. The main species caught was brown trout and sometimes grayling with the same methods like in sector 1. This sector brought us 35 penalty points and from the rivers, it was the most successful for us. Even better were Italians who had no blank score and their sum of placings was 31.

“A small river” Fiplingdalselva (sector 3), whose competition venue was lying between two lakes, was not small at all. It could be about 80 m wide and it was only very shallow with clear sandy bottom, thus without any hide spots for fish. It was a disaster for almost all teams, because only 45 trout (6.7 %) was caught there. A small shoal of brownies was swimming from the lower lake and it depended only on the fact, where they stop. Despite this fact the Czech team won there the entire contest, when it was enough for them to catch only 5 fish. Pavel Chyba caught there 2 pc (2nd place), two catches had also Martin Drož (1st place) and only one fish caught Tony Pešek (1st place). Both of them caught the fish as the only ones in their beats; Adam and Roza were blank here.

Especially Pešek´s catch of a big brown trout could be from the tactical point of view equalled to the deer shot. There were many careful attempts at getting the only fish found which several times migrated between neighbouring beats. No fish was caught in Adam´s beat No. 10 during the entire competition. French and Italians were blank in this sector four times! You could fish there with a nymph and French leader, with a dry fly and intermediate line and flies drawn upstream. This venue should not have been a competitive venue due to a very random occurrence of fish, which were practically only between beats No. 21 – 25, from which 36 catches were from total 45 catches. Completely nothing was caught in thirteen beats during five sessions.

Sector No. 4 was located in a big lake called Storvatnet and it was a boat fishing competition, always 2 competitors and one boatman – controller. This competition venue was very successful for the Czech team, because it gained there only 35 penalty points for 14 catches between which were brown trout and arctic char. We were fishing with intermediate or sinking lines class 5 and the same flies like on a big river. The most successful was Tomas Adam, who had 7 catches and won his group there, as well as Antonin Pešek (4 pc), Pavel Chyba caught there 2 fish (2nd) and Martin Drož one catch (5th place). Only Luboš Roza remained blank, but also Italians were twice blank there and the French three times. Altogether 72 fish were caught there (10.8%).

A small lake Svartvatnet was the last 5th sector of the competition venues and it was a surprise that it was located 85 km from the hotel, when it was nothing special regarding the catches. Altogether 83 catches (12.4 %) were recorded there. Czech achieved the sum of placings 38 for 10 trouts there. The best was T. Adam, who caught 7 fish (1st place). Three other competitors caught one trout each: P. Chyba (3rd), A. Pešek (6th) and M. Drož (3rd) and finally L. Roza was blank there. The Frenchmen were blank only once and their sum of placings was 34 and Italians were blank twice. Both lakes also contributed to the overall excellent victory of the Czech team.

In the team competition, Czech team finished third after the first round and then it was on the top rank till the end, when the team had the least of blank competitors (7) in the contest. Finally, the sum of their placings was 231 (63 fish) and this meant the gain of the ninth World Champion´s trophy. Second finished Italy with the sum of placings 283 (72 fish) and Italy had by 22.5 % worse sum of placings than the Czech team and one blank score more. Our biggest competitors from France were third this year with the sum of placings 295 (56 fish) and the French had two more blank scores than Czechs. On the fourth place finished Finns with a significant distance of 362 points for 35 fish. Surprisingly, the fifth finished the American team (366/48) and the first six were completed with the home team of Norway with the sum of placings 376 and 28 fish. From other countries, Poland was seventh, England eights and Slovaks twelfth (429/30). In historical “table of truth“, which counts the medal success at the world championships, we moved to the first place with the score of 73 points and we are one point better than the second France. 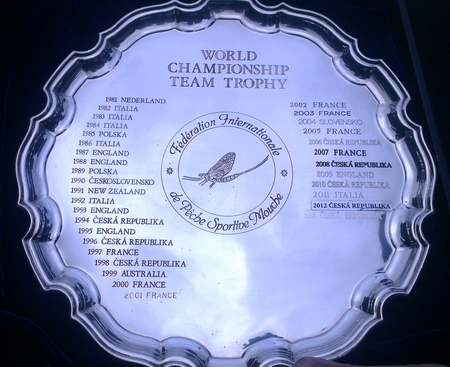 In the individual competition the World Champion was Italian competitor Valerio Santi Amanti who caught 25 fish and his sum of placings was 14. He ensured his triumph in the last session at the feared sector No. 3, when the draw assigned him the winning beat No. 22, where he caught 8 trouts. In historical table of individuals, he is on the second place with 8 points (twice gold and once silver). For the second place, Martin Drož had to catch only ten fish, but he had no blank score and thus he was silver with number of placings of 19 and also he moved in the table of truth upwards and currently he is on the 6th place with 6 points and each medal once. A surprise was the third place for a young Belgian competitor Julien Lorquet (16 catches) with the sum of placings 26. Even he was lucky that in the first round he was in sector 3 in the beat 22, where he caught 7 trouts. Only this trio managed to catch a fish in all five sessions. They were followed by 4. Antonín Pešek (37/8), 5. Sebastian Delcor (France) – 39/12 and 6. Bertrand Jacquemin (France) – 40/16. Ranking of other Czech competitors was as follows: 8th Pavel Chyba (41/7), 14th Tomáš Adam (53/19) and 52nd Luboš Roza (81/19).

We could say that all was good and organizers must be appreciated for their great effort. Despite this we cannot omit the fact that the championship again created conditions for random sport results which were seen especially in sector 3. The best Czech competitor Luboš Roza was blank in the entire competition three times and in his case it is nothing more than a big bad luck during the draw. In the last round he was in sector 3 just in the neighbouring beat with the winning Italian competitor, when a small shoal of migrating brownies settled in his beat and which were showing about 15 m from the border on the “Italian side”. While the new World Champion was walking along the bank and providing interviews for media, our Luboš was praying for a miracle which would move these brownies a bit downstream. It´s a pity that FIPS-Mou has nobody who could oppose to less experienced organizers upon the selection of competition venues. This lack can be eliminated in the team competition, but in the individual competition it is like a big lottery...