A short reflection on results from Slovakia

I am not likely to remind to anybody that this year´s European Championship in Fly Fishing in Slovakia took place in the mid September on very similar venues to the World Championship in 2004. The only bigger change was the exchange of the Orava river for the Poprad river, but from the point of view of fishing this change was not significant. Even if almost 10 years have gone since the World Championship, the organizers did not try to include at least one still water venue, which is such a common standard nowadays. Otherwise, it is necessary to say that all venues were very well stocked, because altogether 7,908 fish were caught.

The Czech team consisted of David Chlumský (3.), Filip Apjar (4.), Roman Jorka (6.), Roman Heimlich (16.) and Tomáš Cieslar (17.)  and was a big favourite of this competition and the team´s quality has proven again (sum of placings 97), even if this time after a great fight with the Spanish team (102), which managed to defeat also redoubtable French team (141). Poland (159) finished fourth and Slovaks (174) fifth when they finally moved the Romanian team (175) to the sixth place in the last session. There are several reflections from the team competition.

The Spanish team, which was helped by two guides who are probably the best Czech experts for the Váh river (M. Čubík and L. Roza), was doing excellent and from the very beginning they were always a step ahead of our guys. They were getting points especially with the dry fly, but also nymphing was not bad for them. The Spanish (altogether they had 778 fish) won four periods of the event, once they were third and the ill-fated was the session one before last, when they finished on the ninth place and got 33 placings for it. By coincidence this fifth round was won by the Czechs with the best sum of placings 9 and this decided about our overall victory. In other rounds we were three times second, once third and once fourth and even if it seems that our guys did not have such a good draw as their rivals from the Pyrenees, they managed to stay calm and became the European Champions with 844 fish.

With a bigger distance finished the French team on the bronze step, when they were once first, once second, twice third, once fifth and in the last round eighth (with altogether 669 fish). The Polish who were almost fishing “at home waters“ were fourth, when in one round they were second, three times fourth, once seventh and once tenth. Again they were scraping the bottom with heavy nymphs and this was not the best tactics. 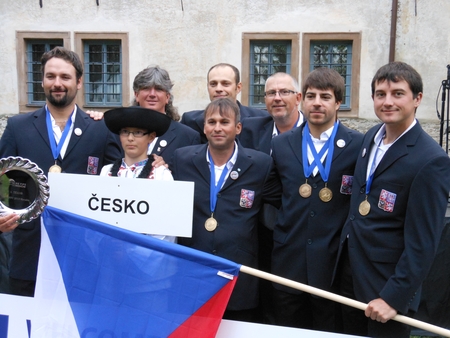 The fifth place of the home team cannot be regarded as a success, but as a confirmation of the standard Slovak position in the world fly fishing. They were starting on the ninth place, in other three rounds they finished identically on the seventh place and on the last day they started copying Czechs and they were twice third. The example of these two teams shows that fishing only with heavy nymphs is not enough today, because the ability to fish with a dry fly is also very important. Finally this showed the sixth Romanian team who are always favourites when they use the dry fly. Italians who were in very strong team composing did not excel at this championship and finished eighth behind Finland.

Some fans of Slovak fly fishing were surprised why their B-team was sent to the contest, but in my opinion even the A-team would not finish significantly better, because the Czech team was in fact also the B-team. At this occasion I have to remember the World Championship 2004, when before the last round we were leading by 28 placings and home competitors miraculously managed to win the last round, when they all were first. This time, it was not possible, because there were international supervisors and the truth has proven. I have heard various explanations many times that this excitement of home controlors from the World Championship 2004 was not intended against the Czechs, but unfortunately I have never heard even a silent sorry. Only the Secretary of the Slovak Fishing Union was looking through me and he did as if I did not exist.

Fair-play is the basis of our sport and who does not realize it, can win at home, but this is the only thing they can achieve. And to recognize the quality of the rival and bow down to the rival as our team showed this year at the European Championship to Spaniards at the final ceremony, this is the way to even higher goals, because we still have something to learn from our best rivals.