This year´ s Youth Championship took place in the province of Galicia, Spain from 8 to 14 August. Therefore, it was expected that this Championship will be in the spirit of a dry fly, which the Spanish are very strong in. According to the instructions, these competitions should have been done in 4 rivers and on one lake with boat fishing. We focused our preparation on dry fly fishing with a long leader. All experienced competitors: Tomáš Langer, František Adam, Petr Červenka, Libor Marienka and the youngest Michal Melnar qualified into the team. A week before the Championship, the organizers cancelled the lake competition from boats and substituted it with the second sector on the Xallas River.

Even if Spain is a rather distant destination, we decided to travel from the Czech Republic to Spain by car. The drive took almost three days, but we could survive it. We arrived in the place of unofficial training according to the plan – on Monday, 1 August. On the second day, our friend joined us and a great Spanish competitor David Arcay who showed us all competition and practice sections of rivers. Finally, he was fishing with us for a while on the Mandeo River and showed us fishing with foam beetles in difficult parts of the river. Later in the contest, this tactics saved our souls several times. We chose our accommodation before the Championship near the Xallas River and the way to training was really short for us. The competition sector was just behind the house. Other rivers meant a whole-day trip and we visited each of them twice. On the Eume River, any training was prohibited and so all teams (probably except the Spanish team) were full of expectations.

Mandeo River – a small river with many shrubs along and about 5 meters wide river. Very technical fishing under branches over the water surface. Length of competition beat was ranging from 300 to 500 meters.

Anllons River – a bit bigger river also with many shrubs. The length of the competition beat was ranging from 600 to 850 meters.

Eume River – the most beautiful river for us with limestone bottom and crystal clear water. The natural reserve was packed with tourists. The last competition beat was finishing a few hundred meters from the sea bay from which sea trout started to swim upstream in this period and thus the competition was promising interesting moments. The length of the competition beat was ranging from 600 to 850 meters.

Xallas – The biggest river with probably the same flow as the Eume River, however, much wider and not so fast. There were two competition sectors of the length of competition beats ranging from 150 to 200 meters.

At the team meeting, we decided that I will go watch the Eume River with Tomas Langer and I will gain the information for the upcoming competition. The organizers marked the river beats, in order, to provide the same number of streams for all competitors. Some beats were 850 meters long and some only a half of that and there were also free sections between the numbered beats. All beats were quite balanced which was also reflected in the competition results in individual rounds. In the first round, Tomáš caught 5 brown trouts which was enough for the fourth place in the sector. He also caught there many small fish under 18 cm which was the minimum size for the eligible fish. Only one sea trout was caught during this round. Young Polish competitors won the first round, second were French and the third Spanish team. Our team was on the fourth place just before the Americans. 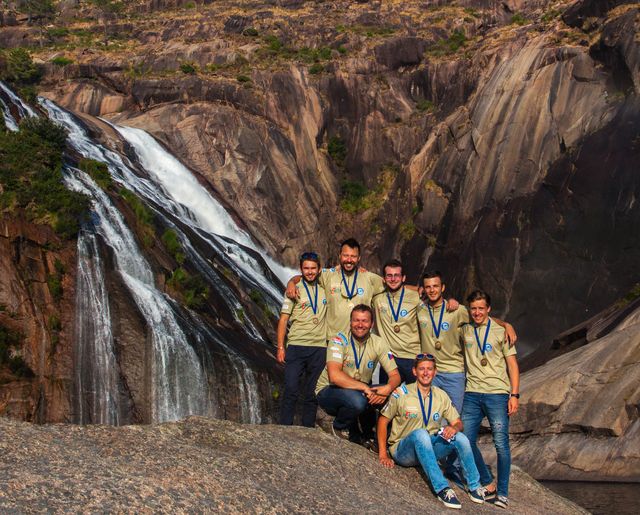 In the second competition at the Eume River, more sea trouts were caught and two of them were caught with a dry fly also by Libor Marienka, who finished third here with 5 fish. In the second round, the Czechs finished second just behind the French and before the Polish team. The first day showed that the main fishing method was not a dry fly, but due to the colder weather, it was our favourite nymphing. Relatively few fish were caught in all sectors, which denied expectations of organizers. Very good results showed the French and also the Poles who were only nymphing and they always caught one fish more than our competitors who were continuously on a third place. Surprisingly, the Americans were in the lower part of the results after two rounds on the fifth place. The second day, there was only one competition round on the program, where the ongoing results remained the same and all was still open.

On the last day and during the last hour before lunch, it got warmer and fish started preferring dry flies much more. For example, it was necessary to catch twice more fish in the afternoon than in the previous rounds at the Eume River. Suddenly, the Americans woke up and they convincingly won the fourth round and beat excellent French. Czechs got onto the ongoing second place before the Poles and the Americans were already on the fourth place. The Polish tactics was based only on nymphing and during the last round they fell off the medal positions onto the fifth place. Our team also did not succeed in the last round and we finished there on the fifth place before the Poles, who were the sixth. The French kept to good results, increased their lead step by step and they could easily watch a severe fight for other positions. In the end, the French really took control over the Championship and they won all possible medals in an unseen way. The second place took the Americans who won even the fifth round, where also young fly fishermen from South Africa were successful and they were second in the last round before the French. The Czechs finally gained a bronze medal (three times third place in the last three championships). However, it is necessary to say that financial sources of the Czech team are much lower than those of the American team which was seen on the number of guides and various other consultants.

During the championship, we watched the tactics of our main competitors and the tactics was not much different from our combination: nymph, cling and ding and the dry fly. The results were always very equal and often only one fish decided about the success and failure. Unfortunately, our youth did not manage to cope with a small amount of fish caught and they lost too many fish. The winning French, who did not have good results in last years, occupied first three places in the individual competition had their tactics based on fishing only with one nymph. And this was probably the most decisive factor for fishing under branches. In our country, we are not used to fishing with one nymph only. The second difference which I watched at the French, but also at the Spanish, was carrying spare rods on their vests during the competition. In the case of really long length of competition beats, when judges could not carry competitors´ rods, the exchange of the rod for the competitor was a really big loss of time. We have to work on these tactical issues in preparation for the next championship in Slovenia, because fishing with one fly only shall be used.