European Championship 2018 or a nymph versus squirmy wormy

Between 6 and 11 June 2018, 24th European Fly Fishing Championship was held in South Bohemia. Fourteen male and three female teams applied for this competition. Two competition sectors were marked on the Vltava 28 between Vyšší Brod and Rožmberk and one sector was marked on the Vltava 29 in “Devil’s  Rapids”, which is a bouldered stream flowing from the Lipno Reservoir and ending in the Lipno 2 Equalizing Reservoir. Two lake competitions in the trout reservoir called Květoňov (6 ha) located near a small town of Kaplice were added into the competition scheme.

Several innovation, which have proved well in domestic competitions, were tested on the international level at this European event. On the Květoňov Reservoir, both standard bank competition, during which the competitors tested three different beats, and also the boat competition were organized. For the first time in the history of championships organized under the FIPS- Mouche, competitors were fishing from anchored boats and they also changed the places three times. It is necessary to note that a week before the championship the reservoir was stocked with new rainbow trout.

In the river venues – sector 1 (upper part of the Vltava 28 downstream of Vyšší  Brod), competitors were changing after a half of the three-hour long session, when the neighbours swapped their beats  and the similar thing happened in sector 2 (Devil’s Rapids), but in sector 3 (lower Vltava 28 upstream of Rožmberk) the session was organized in a standard way when the competitor was in his/her 250 m long beat for all three hours. The sector 1 should have tested the ability to catch a big native brown trout, but among them sometimes a big rainbow trout occurred. The sector 2 was characterized by very difficult, bouldery riverbed with a big downslope of water and the occurrence of small brown trout and also dace and roach which get here from the equalizing reservoir at the spawning time. The sector 3 – lower Vltava 28 was very well stocked 10 days before the contest with big rainbow trout and besides them there are also medium size brown trout, but also chub and dace. Generally, all fish species were eligible from the length of 20 cm. This variable fish stock should have discover the best European fishermen for 2018. 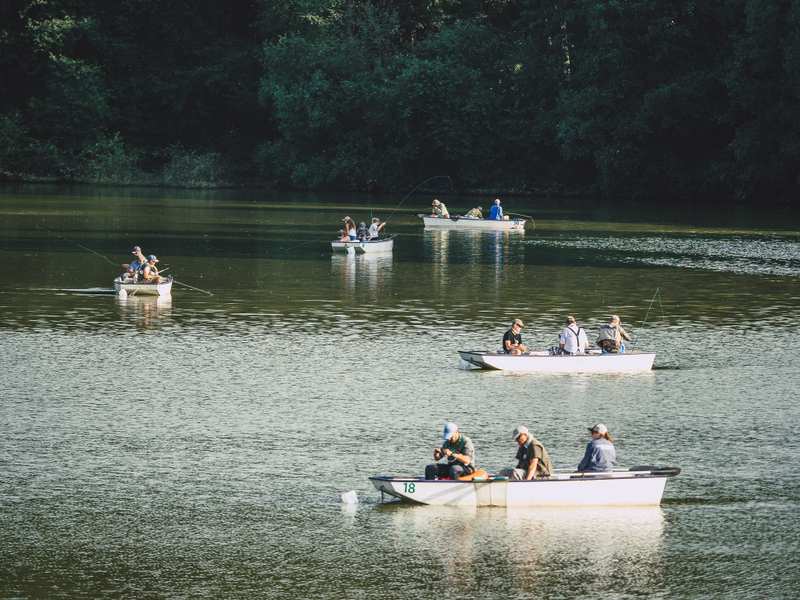 The centre of the Championship was a holiday resort Penzion Herbertov, which is located between the sector 1 and sector 3, immediately on the bank of the Vltava River and some groups were accommodated in the Hotel Panský dům in Vyšší Brod. Some groups arrived already a week before the Championship and they were training hard outside the competition venues. Among the biggest favourites for the victory, besides the local competitors, were the teams of France and Spain and it was only a question who will take the trophy in the team and individuals. A special attention was paid to competitors from France who last year won a unique fly fishing Triple Crown, i.e. they won the European Championship, World Championship and the Youth World Championship. But we were also waiting for if the Czech team remains unbeaten in domestic waters.

As I have mentioned, also 3 ladies teams applied for the competition – they were from the Czech Republic, Finland and Norway. We have not managed to push through ladies category as an official competition under FIPS-Mou, but despite this fact all competitors understood that this will be at least the unofficial championship in so far non-existing women’s category. If this problem is not solved, it will be difficult to expect any development of female competitive fly fishing.

The championship itself was opened on Wednesday (6 June) by the team registration in the area of Penzion Herbertov. The Captain’s meeting followed the lunch and the than the Children’s afternoon which substituted the Anglers’ Symposium. Seventy young children from surrounding schools, who are interested in angling, took part in children angling competitions. Then the Captain’s competition was held and during this time all seventeen teams were introduced. Thursday (7 June) was reserved for official practice and then everyone was waiting only for Friday morning when the competitions started. 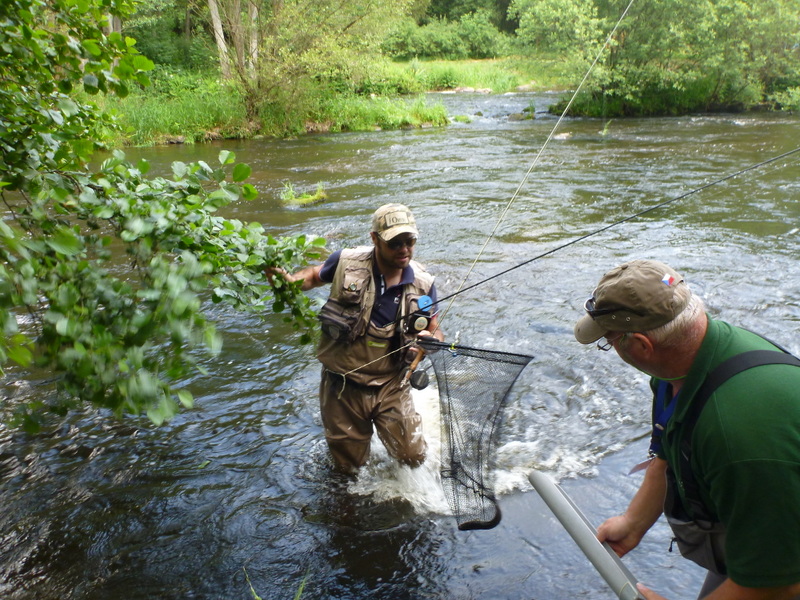 The first round of completions, on Friday (8 June), was in favour of France when their team caught altogether 114 fish and the sum of placings was 19 (8, 1, 2, 1 and 7), second was the Czech team (26) with 7 points behind (4, 6, 4, 2 and 10) with 100 fish and just one placing behind was the Spanish team with 105 fish (1, 4, 5, 3 and 14). The French surprised in the river sectors by using squirmy worms either as an artificial bait on a short “Czech” leader or in combination with a small nymph or a very well swimming dry fly. On the contrary, the Czechs were fishing with small and petty nymphs on a long “French“ leader, but on the lower Vltava section they were not afraid of using streamers for fishing of rainbow trout. The Spanish were also nymphing, but they were trying to use their strongest weapon which is a dry fly. With respect to a surprisingly low number of rising fish this year, there was no big advantage of a dry fly. Winners of individual sectors were: Andres Santamaria (ESP), Jerome Poirier (FR), Martin Klaučo (SVK), Sebastian Vidal (FR) and Andy Cliffe (ENG) who used his boat experience on the Květoňov reservoir and set his record catch of 34 rainbow trout there. From the bank, 72 fish and from the boat 245 fish was caught.

In the afternoon session, the Czechs were the best with the sum of placings 19 for 97 fish (4, 1, 2, 8 and 3), the second were the Spanish (21) with 83 fish (2, 7, 3, 3 and 6) and the third was the ladies team of the Czech Republic (CZ-L) with the sum of placings 28 and 66 fish (3, 8, 8, 1 and 7). This moved the French team on the fourth place with 77 fish and the sum of 32 (1, 2, 15, 5 and 9). The winners of individual river sectors were:  Gregoire Juglaret (FR) Pavel Chyba (CZ) and Ville Risolainen (FIN). Pavel Chyba was in sector 2 (Devil’s Rapids) with 9 eligible fish after a half of the competition far away from the victory, but after the beat swap, he miraculously improved and with the total result of 31 fish he finally won his sector. It was caused by the fact that in his first beat there were many brownies shorter than 20 cm required. At the afternoon bank session, on the Květoňov Reservoir, it was problematic with fish as this was caused by warm sunny weather and increased occurrence of green algae. The number of fish caught significantly declined compared to the morning session, because trout was further from banks and in deeper water. From the bank, the best competitor was the local competitor Kateřina Švagrová (CZ – L) and four competitors remained blank. From anchored boats the most fish (21) was caught by a Finnish competitor, Eetu Hyvari, only 28 fish were caught from the bank and 168 fish from boats.

On Saturday (9 June) the participants were competing in the third round and in the afternoon there was a break for competitors’ recovery and calming of pricked fish. The French started with squirmy worms and the sector 1 was dominated by Sebastian Vidal who was fishing in streams around the railroad bridge in Vyšší Brod, from where he recorded 24 fish, especially large brown trout even over 40 cm and this way he managed to get before Carlo Saciaguri from Italy, who finished second with 27 fish. Italians were successful in Devil’s  Rapids, where Federico Santi Amantini won with 39 fish. In the third sector on the lower Vltava, Pavel Chyba (CZ) won again with 35 fish. On the Květoňov Lake, the first was Jerome Poirier (FR) first with 7 fish again, but five competitors were blank there again. From the anchored boats, the first was Luis Alfonzo Gonzales from Spain (20 fish). From the bank, the anglers caught 37 fish and 185 rainbow trout from the boats. In the third round, the best was the French team with 93 fish caught and the sum of placings 23 (1, 2, 12, 1, 7), the second was Spain with 87 fish and the sum of placings 27 (10, 3, 9, 4 and 1), the third were Irish with 73 fish and the sum of placings 32 (11, 4, 3, 3 and 11).  The domestic Czech team was not doing in this session very well, when they finished on the seventh place and the sum of placings was 38 (78 fish). 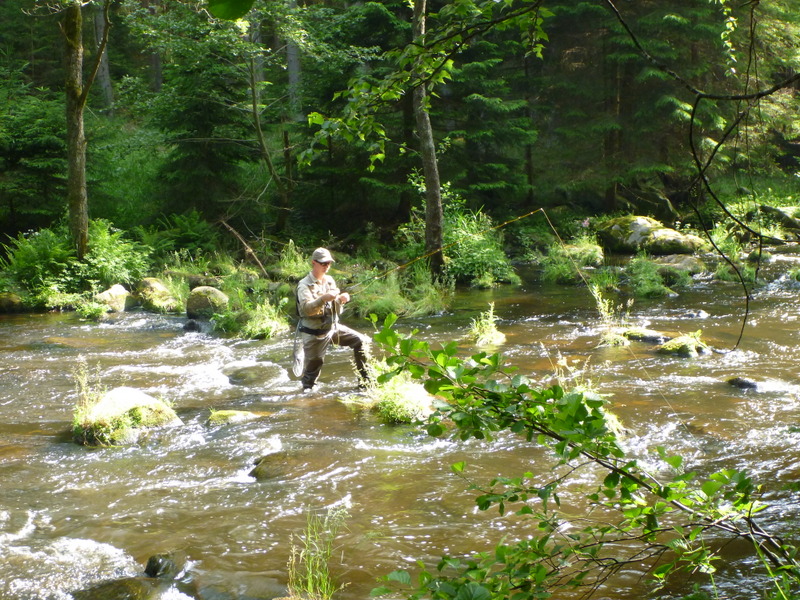 On Sunday afternoon, there was the last round of the championship and all were expecting smooth victory of the French team. In the first sector, they finished on the 8th place when a little chance for the Czech team revived Roman Heimlich with his first place for 24 fish. The sector 2 was dominated again by Jean-Benoit Angely from France (33 fish) and  Jaroslav Dudych from Poland (16 fish) won sector 3, but Sebastian Vidal from France was second there  with 15 fish and nothing was showing the fact the French team might lose their clear victory. But then this happened …

Suddenly, the Czechs were on the first place with total sum of placings 119 for 418 fish, second was France with a silver sum of placings 132 (437 fish), third place and bronze medal won Spain with the sum of placings 143 (394 fish). A sympathetic team of the CZ – L finished on a beautiful 4th place (168 / 332), 5th Poland (175 / 333) 6th Slovakia (194 / 341) and then 7th Finland, 8th Italy, 9th Scotland, 10th Ireland, 11th England, 12th Belgium, etc. Great place of the Czech ladies team and the title of the unofficial European champions in ladies category can be attributed to their coach – Jaromír Šram, who was a pillar of the Czech team for many years and moreover he is from South Bohemia and he knows the competition venues perfectly. Let’s complete the winners of the last two lakes competitions on the Květoňov: from the bank won Markéta Procházková (CZ – L) - 5 and from anchored boats Kristian Šveda (SVK) - 14, 28 fish was caught from the bank and 78 fish from boats.

The analysis of the success rate of the first three teams is interesting when we separate rivers from the lake. When we compare the places on three river sectors, then the Czechs and the French had the same number of placings 61 and Spain achieved 79, while the Czechs won on the lake with 58, second was Spain with 64 and France finished on the third place with 71. Finally, from this results that the Czechs won this Championship on the lake. In this respect it is necessary to mention the fact that some local experts were saying that we should have had only one lake competition and four river contests. We did it mainly for the fact that we did not want to discourage lake fly fishermen from their participation. And it needs to be admitted that if there was no tactical mistake of a French team in the last session – finally they could have won it. All in all, it seems to me that the match of a nymph and a squirmy wormy ended with a draw. Even if the worm had no competition in Devil’s Rapids (1, 2, 2, 2 and 1). From this results that the Czechs should reassess their refusing standpoint to this artificial bait which was prohibited at the competitions for 4 years. Competitors from France showed how far they have moved in such a short time from the discovery of this new phenomenon. 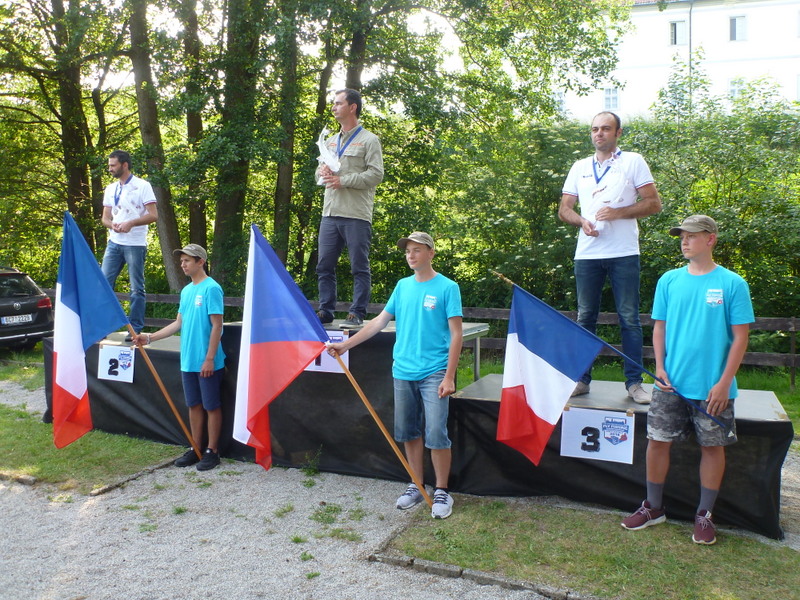