In December 2019, WCh 39. were held in Tasmania. Blessed with aproximatelly 8,000 bodies of water and countless connecting rivers and streams, Tasmania is a wild trout fisher´s paradise. The trout in Tasmania are predominantly wild brown trout stock reared from eggs imported from England in 1864, but with a few rainbows here and there which are now also effectively wild. The fisheries are expertly managed by the Inland Fesheries Service who in the main are all passionate anglers themselves. This unique combination of shallow, food-rich lakes, low rod pressure and active fisheries management equals one thing: simply unbelievable wild trout fishing in a unique and inspiring wildlife-rich landscape.

Team England this year comprised of myself as captain, manager, competitor and chief cook and bottle washer with Tony Baldwin, Lee Bartlett, Stewe Cullen and Mike Dixon fishing five sesson each, and Bernie Maher as actting captain and reserve. It would také a small novel for me to recount each day from a team perspective but here is an account of my championships, session by session, in what turned out to the most memorable week of my fishing life to date.

The first draw for me was Penstock Lagoon, a 2,5 km long water supply reservoir between Hobart and Launceston, and the lowest altitude of the three lake sectors. Beenig tree-lined, Penstock was also the most sheltered venue and offered dun hatch making an appearance. As we decanted from the coach the strong wind was cold and the lake, although fishable, was still rough with lumpy waves creashing into the downwind shore making it quite frankly look a long way away from producting any kind of dun hatch in the unseasonably late spring weather, which would persist for the duration of the whole event.

My boat partner for the session was Stefan from the Slovakian team and, after a brief discussion in broken English, we decided that he had control of the boat for the first two hours he would fish from the point (a decision that suited me) but that I would control where we fished as I was the more experienced boat angler. This is quite a common occurence as usually the Home Nations have far more boat fishing experience that many of the other world teams and they are often happy to relinguish a lot of the decision-making. Our boatsman was Norm Cribbin – a local angler and fly tyer of some repute.

Asthe signal was given for us to pusch out headed towards the top of the wind, motoring slowly to burn some of the 15 minutes of allocated travelling time as well as to prevent chopping up the weed that is a popular feature of these shallow, food-rich lakes.

We set the drift on a line to cut across the lake, drifting from a shallow weeded area, over the top of the slightly deeper boating channel that runs down the centre of the lake and then into a large bay to the right-hand side of Crisps point or Shack point, as it is also known. We had compiled a large amount of information on Penstok, both from internet research as well as first-hand information from our guides and, based on the maps I had assembled for the team as well as the wind direction on the day. It looked like the best option for me to hit a number of known marks and water depths was to také one, long drift. Our information also pointed to the fact that Penstock was a highly unpredictable water with „hot“ drifts frequently changing from day to day and even from hour to hour. It also tended to fish well at one end and not the other for no discernible reason.

As most of the boats had stayed close to the boat dock and only four boats had headed to our end of the lake it did cross my mind that I´d made the wrong call. As we sat waiting for the start I mused that as we were fishing for predominantly wild browns with a smattering of well naturalised rainbows thrown in, covering fresh water and lower boat pressure was probably a good thing, and supported my choice. 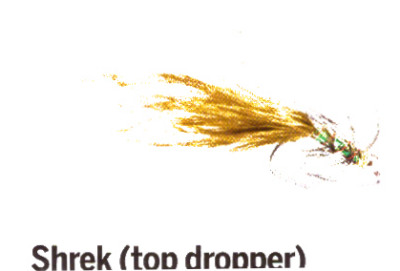 Initially, I had set up with a Di5 sweep line in the car park due to the wind strength, but once on the water I decided it looked more like Di3 sweep wind, so I quickly changed. My cast was 8lb BS fluorcarbon with a copper-headed Damsel patern (called a McGoo) on the point, a Hare´s Ear Dabbler in the middle and a section damsel imitation in the way of a copper-beaded Shrek on the top dropper. Both the Damsels were dressed very slim – far slimmer than we fish in the UK, and something that had been identified as being important in practice, along with possessing a tungsten bead at the head which exaggerated the tail action on the fly rather more than the conventional, lighter brass beads. I also wondered if the impact of tungsten pulled the territorial browns to the fly better when fishing close to the weed and structure – which they seemed to prefer – so my plan was not to fish any brass bead – headed flies at all duringthe event.

As the match started my boat partner quickly hooked and landed a fish on an intermediate, making me wonder if the Di3 had indeed been, I stroked my flies into the hang and first fish on the session went airborne with the top dropper firmly in its scissors.

With one of the card and s long drift ahead, I started to fish every cast with more and more confidence. One crucial point we´d discovered in practice was not to cast too far – fishing for territorial browns it seemed most of the takes come on the first few pulls after the initial drop of the flies or on the hang and a short, fast pull-retrieve with an occasional stop mixed in seemed to work best so I pulled 12 – 15 yards of line from my reel and turned up the drag to stop me over-casting and forcing myself to work and angles in front of the boat. As the drift progressed, we both caught a mix of browns and rainbows keeping wihin a fish of each other for most of the drift. As we hit the downwind shore my boat partner quickly caught two fish to put him ahead and this again made me question the Di3, as he seened to be generating more interest from the fish than I was.

We pulled out wide for a second shot at the drift and I hit a fish first cast, again on the hang on the Di3 – quickly netting it in the few second of disorientation after hooking. This fish actually jumped out of the measuring trought before being recorded. In this instance, under the rules you are awarded the average size for your session so not a disaster and, as it happened, it was actually a blessing in disguise as the quick turnaroud of a fumbled fish (much faster than carefully measuring and recording a fish) allowed me to start fishing again whilst still in a good area, and my last two casts on this short drift both resulted in fish in the measurng trough.

As we motored back upwind, I looked around and could see a few boats on the move from the far end of the lake – a sign maybe that the far end of the lake wasn´t producing. We quickly pulled in again for a short drift in the top left-hand corner of the lake over the shallow weed-beds, and the lighter wind allowed me to see a long way out from the boat in the clear water. Keeping this in mind, I pulled up onto the hang with much more line out to keep the flies hanging further away from the boat and, first cast, a rainbow obliged, again on the top dropper, and the next quickly produced another of the same size, As we approached the end of the drift and after a period of inactivity, I checked my watch and with only 35 minutes left, I looked around for our next move. As I turned, a strong gust of wind hit the boat followed by a total white-out from a random snow-blizzard which obscured everything in sight!

As we motored up towards the top right-hand side of the lake looking for our next drift whilst being pelted in the face with snow, it stopped, just as suddenly as it had started. Not only did it stop snowing, but the wind dropped, the air temperature suddenly warmed and within seconds I saw a dun hatch an the surface! By the time we had turned the boat onto the drift the hatch had started to happen – first one or two, then ten or 20 duns quickly followed by yet more. Then the fish appeared, and in good numbers too, aggressively smashing at the hatching duns. I made one short cast with my Di3 over a moving fish with no response. My boat partner´s first cast produced two chances on intermediate, so as quick as I could, I wound the Di3 up until the top dropper hit the tip-ring, changed to a slow glass and repleaced the top dropper with a second Dabbler. I made one decent lenght cast across two moving fish but again drew no response, so with no time to make another change I halved my cast lenght to no more than five yards of line and started to dibble the Dabblers in traditional loch-style across the front of the boat using the tungsten-beaded Damsel on the point to anchor the cast. First cast, and a large, dark head engulfed the top dropper, and a few minutes later as Norm slipped it back, I covered another rise and again instantly dibbled the flies for a carbon-copy of the first fish, again a solid 3lb brown. With that one measured Norm called :“ 1 minute to go“. Just as my third fish in three casts again engulfed my top dropper in front of the boat. This fish didn´t co-operate, and I used almost every second of the ten minutes allowed playing time to get it to net. When I finaly went owet the rim the 51cm brown made fish number 11 on my score card. Thinking I had pipped my boat partner by no more than a fish or two. I was shocked when he revealed I actuall had a four-fish margin.

As we motored back to the dock and the inviting warmth on the lunch tent to learn our fate, I was pleased with my eleven fish and quickly after landing was collared by another competitor, who quickly told me that he thought Rene Coops of the Netherlands had won the session with ten fish, whilist sacond place had eight fish! My last-minute fish had secured me first place on Penstock, ahead Rene and a one place point fish, which would later prove to be one of the two most important fish I have ever caught competitively.

Over the past 30 years Howard Croston has fly fished in excess of 20 countries for more than 40 species. He´s represented England over 20 times including numerous world championships in both fishing and casting. He works for the Hardy and Greys brands from product development to global brand management.