How i won the world I 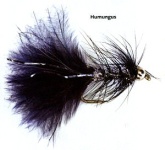 LEVEN hosted one of the five sessions and has been kind to me as I won the Brown Bowl here in the Home International in 2003.

I base my approach on the information gathered in last year's practice and my general wild brown trout experience.

I'm lucky to be drawn with Donald Forbes from the Scottish team. I plan to fish the Sluices then drop down to Calveston Strip, but Donald has other ideas and I let him go where he wants because this is his home water. Donald's friends had fished the loch, receiving plenty of hits but without landing many. Are we to follow that trend? I glance at my partner's set-up; he has a fast sinking line teamed with a couple of Humungus lures with something in the middle. My set-up is a Humungus on the point with two wet flies on droppers, a Claret Snatcher and Doobry, which were successful last year. I choose the Airflo Expert 40+ Di-7 line, whereas my partner has the standard Di-y. I select my lo-foot Multi Loop rod, which is powerful yet light enough to switch to lighter tackle for nymphs or dries if needed. You can't afford to be swapping rods during the three-hour sessions.

When fishing for wild browns you must have a clear strip of water in front with no boats obscuring your intended drift. Too many drifts over feeding fish will put them off.

It's important to get tactics right early. Within the first 10 minutes we both have firm takes but no connection.

These are surprisingly aggressive takes so I instantly raise my rod tip several feet from the surface to absorb any further 'smash and grab' raids! Having the rod tip low and pointing down the line is fine when takes are subtle, but often leads to missed fish when takes are aggressive. I count my partner's line down and vary mine from his so we're at different depths. After a few hundred yards we both hit several fish but fail to connect. I use a combination of Knapek, Hanak and debarbed Kamasan 8175 hooks and it seems I'm missing takes on all three.

After 90 minutes we swap sides of the boat, so I'm at the stern, allowing me a better angle across the wind when casting. This helps achieve better hook-ups because (while moving upwind) fish take the fly from an angle as opposed to from directly behind. With the latter, you strike directly away from it, potentially pulling the hook out of its mouth.

But, when pulling flies back across the wind and the fish takes, as you strike you pull into the 'scissor' area of the mouth, creating a better hook up.

Most of my takes come at 10 seconds down on the Di-y with a fast retrieve. I try the slower retrieve with longer slow pulls, so the line sinks deeper, but takes dry up. I receive takes early in the retrieve and then fish follow nearer the boat, with little interest in between. This, and seeing the odd fish rise, tells me the trout aren't deep.

I change to the slower sinking Di-5 line, while my partner sticks to the Di-y. The Di-5 keeps my flies in the 'feeding depth' for a full 40 yards, offering more chance of success.

Given that we've had about eight follows, I also remove the middle dropper and keep my two flies 14 feet apart. Although these fish have very little pressure, they are wild and seeing two or three flies at any one time may spook them.

The Di-5 also means I can slow the retrieve down while keeping the flies high in the water. Although not landed, I manage to get the rod into two fish, only to lose them during the fight.

This often happens, especially with wild browns, which fight strong and leap a lot!

At least the Di-5 is better than the Di-7, I which had hits with no real connection. With the flies remaining quite high in the water and the belly of the Di-y beneath the flies, this curve often results in takes with no genuine hook-ups. There's less than an ' hour left. I still get follows * despite a longer 'hang' to hopefully induce a take from deeper down and to avoid the inevitable swirl as I lift the flies to re-cast. I have several more takes, which come higher in the water but still no firm lock-up.

I reckon that many hits are from fish unable to swallow a large Humungus lure. So I drop fly size to a size 12 Claret Snatcher and a size 12 Black and Silver Lure with a red tag.

I've tried rod position, angle of cast, various retrieves, change of flies and a change in the number of flies. Surely I'll connect with a fish and land it?

With just 10 minutes to go I hook a trout as the fly lands on the water. So the fish are high. But it's hooked at 40 yards - a long way to bring a fish back on a barbless hook! The fish falls off! I'm sure I've squandered my last chance but must stay focussed to the end.

It's perfect - across the wind, through a wind lane but just 20 yards long, keeping the flies high in the water and closer to the boat should I hook a fish. Fearing a blank, my line tightens and I'm willing the fish not to fall off. Again it takes early on the retrieve, but I've only 20 yards to bring it back. I'd slowed my retrieve to very long medium fast pulls and it seems like I've a better hook hold.

After only 20 seconds the fish is in the boat! I always play fish hard because the longer it's in the water the better chance it has of staying there. A stunning Loch Leven brown of 38.ycm nestles in the measuring tray.

My one fish takes sixth position and I'm grateful. Two fish won the session but an individual fish of 67cm was caught!