How i won the world II

THE second session saw me heading for Carron Valley where it was unexpectedly won with just six fish in the first morning session. I'm thinking this will be the session where I'll need over 20 fish to win. On the short bus journey to the venue from Loch Leven, John Horsey confirms some detail about Carron. He'd caught just two fish, which means this was going to be tough.

I need to change my mindset. Gone are the figures of 20-plus fish, I'm now targeting just three to five to keep me in the top places. The six fish winning the morning session were caught by the Italian angler fishing near the starting point, but as my session starts, most anglers head for the far end of the loch some 30 minutes away.

Nearly all the fleet head for the top end with the exception of just three boats. I wonder if I've made the right decision as the boats disappear into the distance. Normally I'd follow the majority and at least be competing directly with them in the same area. And I'd be confident of coming out on top, but I'm sat almost alone at the other end of the lake.

I've made my decision and I'll stick with it. I make my first cast. Again I've gone against the grain and selected flies more likely to catch rainbows than brown trout. When the browns are 'playing' you can typically catch over 30 in three hours but the numbers from the first session prove they aren't feeding. 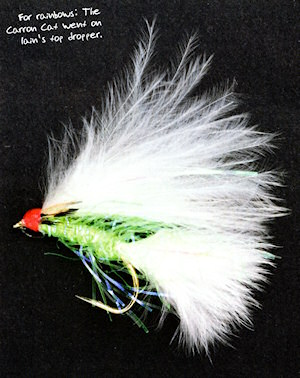 I start on a Di-3 with a Carron Cat on the top dropper, nicknamed after I caught over 20 fish on it in a practice session here last year, a Black Straggle Dabbler in the middle and a White and Yellow UV Dancer on the point. The Dancer has been catching leading up to the championships so it has to go on.

I feel confident because I'm targeting rainbows. The Dancer stand out in the peat-stained water with the drab wet fly only Visible as I lift off. For me, the white and yellow stand out much better than the drab colours in the peat water and this is why I chose two coloured flies.

A fish moves and I cover it at distance with my Airflo 40-plus Di-3. As I start to pull the flies a trout follows right to the boat. The fish swirls around the fly and never looks like taking it. I lift the fly out and cast it back. The fish looks bewildered as to where the fly has gone, but as soon as it lands back on the water it grabs hold, only for me to lose it while reaching for the net. I make my next cast.

Several casts later, within seconds of the fly hitting the surface the line tightens. This suggests the fish are very high in the water and maybe reacting to the 'plop' noise as the fly lands. This fish is also lost and I'm getting 'twitchy' with 30 minutes gone and no fish in the boat. My Spanish boat partner also hooks a fish as his fly hits the water, and loses it. This is valuable information.

I carefully watch the two boats near me who've caught nothing and moved. I see boats swapping from either side of the lake at the far end, so I know there's nothing prolific happening there. This analysis provides valuable information. Two boats even start heading back to the starting area curious as to what we're doing.

I move to Seagull Island and fish the channel between the bank and the island where I'd heard three fish were caught in the last 10 minutes of the morning session.

This is an ideal spot because we have effectively two banks where the fish could lie. The stocked rainbows tend to hug the shoreline for security and browns loiter here to pick off terrestrials that fall to the water.

Within a few minutes I hook a fish in no more than three foot of water as soon as the fly lands. It took the Carron Cat on the top dropper. I land my first fish and immediately take the fly off.

I'm convinced the fish are reacting to the fly hitting the water so I change the top dropper to another White and Yellow UV Dancer. The reaction is immediate as I take another rainbow. I position the boat so I can cast along the bank, parallel to it. Many anglers are casting directly at the bank and pulling their flies out of the killing zone. My boat position means my flies are retrieved along the shoreline about five or six yards off the bank for the full length of the cast and hence keeping my flies in the zone.

My Spanish partner becomes wise to this and after the 9O-minute mark, he swaps me to the other end of the boat. But this allows me to cast towards the edge of the island where he had failed to reach. Remember to fan cast in intense scenarios so no two casts follow the same path.

He changes fly to something like mine and catches a nice brown and a rainbow in quick time. Both come within seconds of the fly hitting the water. By now, boats are passing and controllers wave fingers at them indicating how many fish have been caught and our boat is right up there with about 45 minutes ago. This unintended information is extremely valuable.

It tells me the rest of the lake isn't producing so we don't have to move and waste time. It also suggests that we're using the right tactics. The Spaniard indicates to me that he wants to move to the bottom of the lake but my very best gesturing and pointing convinces him that this isn't a good idea.

We agree to work the same area for the final 45 minutes, which brings rewards. The water's very shallow yet the fish are here. I'm convinced the fish come to the extreme shallows for several reasons. This is where the food is. Cormorants can't dive beneath them to start their attack, so the fish feel safe.

Boats were not allowed to motor between the island and the bank so the fish remain undisturbed. We watch many boats drift towards us only to turn back when the bottom of the lake comes into view at about three feet. This suits us because it's where the fish are. I hook into a very lively rainbow on the Dancer point fly and lose it under the boat after getting it back from 30 yards! This fish takes on a very fast retrieve, arguably too fast for the colour of the water. But, with a fast retrieve in cloudy water, fish have only a split second to make their minds up. This is against the rule for cloudy water -but try it, it works!

I remain alert because the fish come so quick after the flies enter the water. So many anglers cast out and wait a few seconds with slack line and don't hold onto it. Over a seasor about 15% of my fish take at this point so it's important to be ready the moment the fly lands.

With fish taking shortly after the flies landing, I focus on fan casts and the first few seconds of the retrieve. I then increase my retrieve to a fast pull. I make a full cast and within a few pulls everything tightens and a sprightly blue trout leaps clear of the water. That's four fish and second place.

All three-hour sessions are over so quickly. I feel I've made the right decisions. The choice of two Dancers was wise, as no fish came to the wet fly in the middle. More importantly, I was right to stay clear of the fleet. It sometimes pays off. Sticking close to the shores was crucial, because all our fish and offers were within 10 yards of the bank. We didn't have to find the depths of the fish as they had nowhere to go apart from the lakebed.