How i won the world III

PART 3: "TREAT THE RIVER LIKE A CHESSBOARD": That's how Iain Barr took five River Tay browns on his way to becoming World Champion 2009

DESPITE being an experienced stillwater angler, I'm confident I can turn my skills to the river when required. In my 12 years of competing at international level I've fished alongside the world's best river anglers. I've learnt a lot in these years having taken second and ninth individual in the last two European Championships dominated by rivers. Incidentally, I actually qualified for England's river team before the loch-style team, back in 1997!

The River Tay was the only section where teams were allowed practice sessions immediately before the finals, albeit not on the competition sectors. The England team found it extremely tough and averaged less than one fish a man for most of our three-hour practice sessions. In two full days' practice I managed just three fish!

I like river sessions as many decisions are made for you. You have what you have, in my case about 80 yards of river beat. I room-shared with Simon Robinson, a pure river expert and bled him dry for tactical information. Practice told us that success could depend on hatches and you need the weather for hatches to take place. The session is about to start. With bright warm sunshine I'm confident that dries will play a part. Before the hatches start I'll try small nymphs fished in a pair. As a plan B we had the Humungus approach on a sinking line.

As I sit on the bus I've worked out that one fish will keep me in the top few. I set out to avoid the blank. England had hosted a blank and one fish in our first two sessions.

I arrive at my beat knowing an Italian and Belgian angler had taken three fish each. This can work two ways. It gives confidence that there are fish in your beat but it can also mean they've already been caught.

Before starting your assault, carefully study every inch of your river beat. There are two obvious fish lies, which my controller claims produced six fish for the previous anglers. You need to look for underwater features as well as the obvious such as over-hanging trees or large boulders. Look for bubble lanes, which give away the larder trail for the fly life on the beat. On popular rivers, look for areas of water harder to reach as these are often left by other anglers.

I set up three rods consisting of double nymph, single dry fly and single Humungus on a Di-3 sinking line. These combinations will cover any scenario I'm likely to face in my three hours. 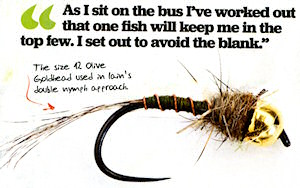 There's no sign of any fly life so I start with the double nymph. The set-up consists of two size 17 Olive Goldhead nymphs about two foot apart. I use a French leader-style set-up, roughly 14-feet of tapered leader down to about 4lb with two 1.5-foot sections of coloured leader - black and red. This makes a great take indicator, as it's difficult to watch a natural leader for movement. At the end of this I have four foot of z.slb Frog Hair tippet. The idea is to fish the two-tone section inches above the surface and watch this for any movement.

With fine line and small fish it's important not to get snapped or to 'bounce' the fish off because the rod tip is too stiff. I use my Loop Multi n-foot 3-inch 3wt - the rod length allows me to keep well away from the fish as I lower the flies in to the water. The soft tip ensures that any fish that take the fly as I lower it down and work it downstream are less likely to 'bounce' offon the take. After all, I'm fishing to avoid the blank and I don't want to miss any takes I get my approach and, although the water doesn't look too 'fishy', I cast into every inch before putting my feet into that particular piece of water. I imagine the water in front of me to be like a chessboard and in my mind I separate it into grids. My fly goes into every square at least three times before casting to the next. This way, every piece of water gets covered.

With just eight minutes on the clock, I lower the double nymph behind a small boulder and the two-tone section sharply disappears. The fine rod tip bends as the fish fights.

I land a wild brown trout of 254cm to the delight of my controller. With adrenalin flying round my body I move back to the same spot. I blitz it for no further takes.

I inch forward and notice a shelf-like feature just ahead that looks inviting but very obvious. In anticipation I lower the nymphs in and before the second one has even reached the water there's a swirl as the point fly is grabbed. I land this and there's still only 15 minutes gone. I carefully make my way back so not to spook the fish and take a third on the very next cast! I miss one more fish then this section goes very quiet. Being careful not to pulverise it, I edge out and head upstream. 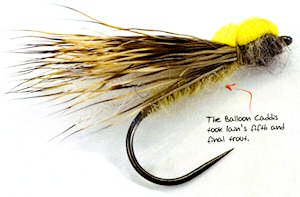 I work what looks the best part of the beat for 45 minutes without an offer. I 'grid' a short section of fast deep riffle and try all three methods with no joy.

Feeling satisfied with my three fish, I head back to the productive section. In case fish have moved back to the lies I had previously caught at, I keep a low profile and work my way back in. While standing in a fast knee-depth torrent I spot a fish of about i.slb head-and-tail in the washing machine-like water. I have to make sure I'm correctly positioned before making the right cast to the fish. In the past I didn't consider my position and this cost me plenty offish in my early years.

There are some obvious snags where this fish is lying, and this is arguably why it has taken station here. I work out that if I hooked it I would steer it down and across avoiding two large weeded-up boulders... or so I think.

I lower the nymphs in and immediately I'm into the fish. Despite my analysis of the beat it takes me across the stream and into a sunken branch I hadn't spotted. The dropper becomes snagged and it's decision time. It's important to keep a tight line. I wade up to chest height to get to the fish and, with the rod held aloft in my left hand, I sink my right arm through the branch to release the dropper only for the fish to storm downstream -amazingly it remains hooked!

Many river fish are lost in rapid water so I steer it to a deep pocket behind a boulder. I succeed but have to negotiate my dropper fly as it heads towards the boulder. The fish settles in the pocket, allowing me to get downstream of it before guiding it to the net. This was arguably one of my most tactical fights from a river fish, and I only just won. The most beautiful wild River Tay brown trout of 39cm is carefully released for another angler to experience. It's important to ascertain the location of a fish, but you must also work out the best position to make your cast and consider how you are going to land it, should you hook it.

No more fish are taken here so I move slowly out. I deliberately leave a large section of water, which looks inviting for the dry fly even though I haven't seen any fish move there. I am 'prospecting' by casting my fly rapidly over about 30 yards of dry fly water in my last 15 minutes of the match. My set-up consists of a lo-foot tapered leader down to 2.slb, this allows me precise casting as I make the imaginary grid over the water in front of me.

It's important that I stay alert as the takes in practice were lightning-fast. I fish a Balloon Caddis, a relatively large dry fly. When fish aren't rising, you have to offer them something worth rising off the bottom for. Within a few minutes a brown trout engulfs the fly and my fifth fish is landed. The smiles are broad as the session ends -three hours seemed like three minutes.