How i won the world V

Part 5: LAKE OF MENTEITH. "THE MOST IMPORTANT 3-HOURS FISHING OF MY WHOLE LIFE"

THIS is the session I'm looking forward to most. I've never cast a fly into Menteith before so this is going to be a tough test.

On a high from my previous session and knowing Davie Parker took first place the session before me on this venue, I'm quietly confident I'll catch. England had mixed fortunes on this water, Howard Croston fished magnificently to match Davie Parker's position with a first place in the first session of the competition but others didn't fare so well.

After my seventh place in the previous session I'm not sure I still hold top spot and I don't want to know. But news filters through that I'm still in pole position. This adds spice to what will now be my most important three hours of fishing ever. Not only that, the England team avoided a blank in session four which leaves us sitting just two points behind the French. Primarily this is a team event so the team and individual medals are at stake on a k venue I've never fished!

The method is to I fish a Goldhead Black Humungus type lure on the top dropper with a Cormorant in the middle and small-eyed Cat Booby on the point, all fished on a midge-tip line. I call this the'See-Saw' method because the top dropper gets dragged deep and the Booby remains almost buoyant. In most situations the heaviest fly should go on the point, but the water's very murky with a maximum of two foot visibility. The fish drop to about four foot when sunny and in the top foot when cloudy. Trout want the fly slow so to fish the goldhead on the point with a slow retrieve will mean it drops beneath the required depth. However, when placed on the top dropper the fly line holds the fly up higher in the water.

We could fish a general lure without a bead but, with the fish being so high and the water so cloudy, the goldbead causes a 'plop' which attracts the fish to the general direction of the fly and increases the chances of the flies being seen.

When the boats head out, I stay with the main fleet. But I'm 'gobsmacked' to see pleasure anglers anchored and drifting through the main area which is relatively small, in a major World flyfishing championships! Despite manoeuvring around these I lock into a fish first cast only for it to fall off. I then fish for 30 minutes without any other offers and the Black Humungus has to come off. Despite it being a method that has worked, I'm not comfortable with it and I must do what I feel is right. I take the brave decision to change. I go for two JC Straggle Cat's Whiskers with a Cormorant in the middle, still on the midge-tip line.

I feel anxious as a few fish are getting caught but they're eluding me. I watch the Welsh and Spanish angler pulling Blobs on a slime line taking three fish in less than five minutes between them. This is totally against what has been working, so I speed up my retrieve and immediately my line locks up. I net this fish and the nerves calm down.

I had been fishing slowly and was convinced that, despite keeping my flies in the top two feet, they were still too deep. I watch the Welsh angler take a fish and I see the boil as he strikes. This tells me the fish are inches down and my slow retrieve was sinking beneath them. 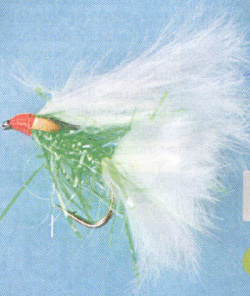 I change tactics to a shorter cast and quicker retrieve, but all to no avail. It's crunch time. One hour to go and I only have one fish. I stay in contact with those around me and sneaky hand signs indicate that one fish, although not disastrous, isn't exactly setting the standards.

I decide to head to the other end of the lake. I have this area to myself and on my first cast I land a pike-ravished rainbow. With its guts hanging outside, the fish is carefully returned.

My optimism grows but no more offers follow and with 20 minutes left we return to our starting point. Catches of one or two fish seem to be the trend.

I return to the harbour somewhat disappointed, thinking lightning has struck twice.

In Norway, 20071 led the field going in to the last session only to finish second. Today's two fish earn sixth place and I have to beat the Polish angler on my session who is in contention and, more importantly, I must beat the French angler from the team perspective.

The first hour after the whole competition has finished is something very special when you are in contention. My mobile phone doesn't stop ringing as team members call to pass on their results. The French had blanked on two sessions and England had one blank. Nothing is official but the French manager approaches and congratulates me saying we have beaten them.

At 9pm the results are posted. Ian Greenwood, England team manager, slips away and despite being a young mid 6o-year-old, he comes bounding back to the restaurant to tell me the good news -1 am the new World Fly Fishing Champion.

That moment will never leave me. My team-mates leap on me and lift me up as we dance celebrating both the team and individual success.

This team was special, unique, right from the management to the reserve. It had a backbone of sheer determination, winning mental attitude and a hunger I have never seen before.

The whole team finished in the top 31 positions, which is incredible. Despite a couple of tough sessions, John Horsey showed his class by finishing loth in the World with Simon Robinson and Davie Parker finishing in the top 20.1 was proud to be in this team.