At the end of August and the start of September the Slovak Fishing Union organised the 24th World Fly Fishing Championships. The organisers attracted a record number of 23 teams , involving the unpresidented number of 240 participants. It was held in the beautiful Tatras area. All were accommodated in the mountain Hotel Permon in Podbanska. The centre of the Championships was however Liptovsky Mikulas, where the opening and closing ceremonies were held. 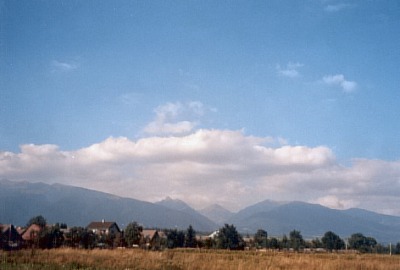 On the majority of stretches there were small grayling and brown trout, sometimes there was a rainbow trout, very rarely huchen. On the Orava River dace and chub were caught and were eligible. Barbless hooks were used, and fish of more than 20 cm were eligible. Sometimes there were very good catches as well as some special trophy bags. The biggest fish of the competition was a brown trout of 57 cm, this was caught by the Spanish competitor Jose Gracia. During training on the Orava River a meter long Huchen was caught.

The five venues were divided with the rotation of five groups of competitors into six rounds. The French team won the first round with a total of 21 placings, in front of Slovakia with 22, and then Czech Republic with 26. In the second round the Czechs led with 12 placings, followed by Belgium 15 and Poland 19, France were fourth 24 and Slovakia fifth with 28. By now it was clear that these five teams were the main contendors for the medals. At the end of the first day the Czechs took the lead with 38, followed by France 45 and Slovakia 50.

The Czechs were excellent in the third round and won with a clear lead, achieving 16 placings. Poland had 19 and Slovaks 28, followed by France with 32 and Belgium fifth with 34. The Afternoon fourth round was won by the home team Slovakia with 23, leading Czechs with 24, Italy with 25. The other favourites had slipped badly, Belgium 35, France 37 and Poland with a very poor 54. Now after two days of competition and four rounds the Czechs led, with 78 Slovakia second on 101, France third with 114, fourth Italy 121, Fifth Belgium 135, sixth Spain 153 and Poland seventh with 157.

In the fifth round Poland made a great recovery and won it with a score of 11, leading Slovaks with 13, Czechs 14, France fifth with 32. And Belgium dropped to eight with 47. After five rounds it looked as if the medals had been decided. The Czechs with 92,were in the lead by a significant margin of 22 placings, in front of Slovakia with 114, France third with 146, followed by Poland 169, Italy 170 and Belgium 182.

However in the last round Slovakia achieved an outatanding score of 6 and overtook the Czechs. Second in this round were Poland 22, third France 27, The Americans with 30 and fifth were Czechs with 31, having had two very bad stretches in this last round. The final placings were now calculated and the Slovakian team took gold with a score of 120, followed by the Czechs with silver on 123, France with bronze on 173, Poland were fourth with 191 and fifth were Belgium with 220. The Top World teams have not changed much over time. This time Slovakia managed to break into the top group. Other results were 6. Spain 235, 7.Italy 236, 8. England 259, 9.USA 270, 10. Portugal 275, 11. New Zaland 299, and 12 Slovenia 301.

Among the participants of the Championship there was talk about the results achieved by the home team. Some of their competitors were fishing amazingly well, even in places where others found it very hard. Polish and Czech observers found that there were some catches on scoring cards no body else had witnessed. It was also strange that at the end of the competition, the home competitors had only eligible fish and bigger fish. This would seem to be supported by the fact that their 544 fish caught were one centimeter longer on average than those of their rivals.

This was possible because there were no neutral judges with the home team on this occasion. FIPS-Mou should think seriously about this situation and should be prepared to nominate some neutral persons, in advance, and not rely on chance events at the Competition venue. Participants in the Championships pay a lot of money, and deserve to see better control in this area. Both organisers and even the International organisation have enough financial resources to decide who will pay for these judges to be present.

In the Individual competition the Polish fisherman Kazimierz Szymala, who won four times in a row in his group, took the lead. However in the last round he finished tenth in his sector and this dropped him to second place in the final scores with a total of 14. This Polish fisherman who beat all his sixteen rivals in the previous rounds and achieved between 40-60% of all the fish caught in the sectors, slipped in the last round to only 13.5% and 10th place, which was very bad luck. How and why he finally lost the gold medal and the trophy of the World Champion will perhaps remain a secret forever? 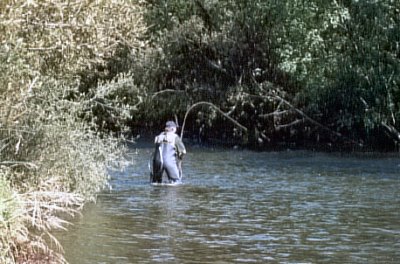 Victory in the individual competition was achieved by the home lav Antal with a score of 12 and third place bronze was claimed by the Czech competitor Dan Svreek with 16. He could have ended higher, but the pressure from the Slovak controllers and sector judges in the last round was enormous. The Czech competitors felt very harmed by the fact that some of the eligible fish were released without any record. The judges attempted to justify this by saying that the competitor had touched the fish with his hand. However, there is no such rule within the rule book ! Only a JURY may reject the catch. He was not only harmed in this way but also, in some cases an eligible fish was released, the judge saying "a small one" ! Other placings in the individual results were 4. J. Canda (SVK) 5. P.Machen (CZE) 6. J.Sram (CZE),7. P.Bienek(SVK), 8. E. Lelouvier (FRA), 9. Y.Caleri (FRA) and 10. J.Souminen (FIN).

Looking at the fishing techniques used, nymphing prevailed. The Slovaks were fishing with bigger heavy end nymphs, and two smaller nymphs above this. Czechs preferred small micronymphs with medium heavier gold head and fished it short. The Polish fished in a similar way to the Slovaks. I would only say that they had larger patterns. Often they fished with a streamer, with which they sometimes had excellent results, but on other occasions were not successful. If the fish were rising then dry flies (CDC Olives, Tags) were very successful, because it eliminated differences between top competitors and outsiders. The French and the Belgians believed in the very small nymphs with gold or copper heads, which they used in combination with their whipping technique for a change. The Welsh had some success with Spiders.

The removal of the markings of different beats and then their re-installation before the next round was one of the very unusual ways of organising things. This inevitably caused doubts as to the correctness of the marking. I have never met such a way of organising things and the explanations for it might be various, including an attempt to try and make an advantage for the home competitors. According to the rules, the numbers must be placed on the venues before the draw and removed after the last round. Another bad habit was the calling between judges, who had created a great spy network for the home team. However the other teams must not use mobile phones and something should be done about this. Hopefully the Congress next year in April in Belgium will deal with this problem. 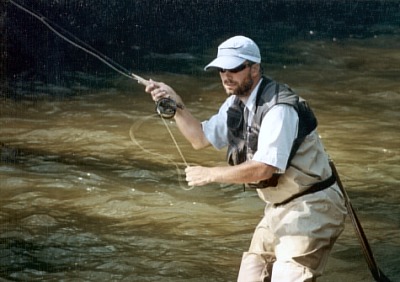 The Slovak Championships were well organised and the fishing was of a high quality. 6256 fish were caught, which was an advantage to both the Czech and Slovak teams. They achieved their first medal in the World Championships and a second in the individual competition.

For the Czechs this was the eighth medal in the team competitions and ninth in the individual competition. As nothing compared with the French. The French fished excellently with a very young team, after achieving four gold medals in a row, a bronze this year cannot be considered a failure. Their captain Jacques Boyko belongs, together with the Czech captain Jiri Klima to a group of the very best experts and it is always apparent they are held in high regard when they arrive to help their team members. Who did not do well sometimes, but he could not be everywhere. The Polish team remained without a medal this year and for the sixth year running, mainly thanks to some poor performances in different rounds, but did not disappoint as much as the Italians and the Belgians.