Between the 14th and 19th of June the XI. European Fly Fishing Championship took place on the San River in Poland. The Czech Republic was represented by two, five member teams. The main Official Team was known as Czech 1 and the other team Czech 2, which was to defend the title they won last year in Sweden, even though some of the team members were different. The First trip to the venue was made in the beginning of May, when our spy visited and the place for a camp was decided which we would use for a week prior to the Competition. Unfortunately the conditions were not good because he river was high following earlier heavy rains and it was not possible to fish at all.

18 teams and 2 individuals applied to fish this year's Championship. There were two teams from Poland, Czech Republic, and England. The England B Team were the national ladies team. A number of teams did not attend, they were Belgians, Spanish, and the Welsh, which was interesting. Otherwise there were no other top teams missing. The Czech Republic top team 1. was created from our old B team, namely; Lukas Pazdernik, David Seba, Oldrich Dvorak, Dan Svrek and Milan Pavlik. It made no difference because both teams had to work very hard. 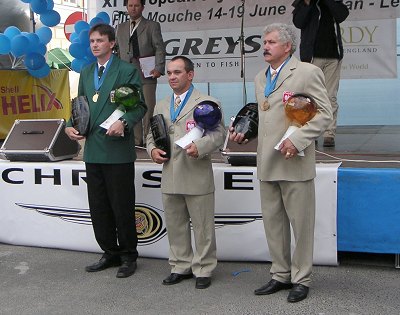 This Championship took place on three venues on the San River, on its small tributary the Solinka river and the equalising reservoir Myczkowce, where boat fishing took place. Our team (Czech 1) took the lead from the first round and they kept it until the last round. On the river stretches the Czechs were excellent and this was also true in respect of both teams. Dan Svreek had some bad luck in the first round, and he did not catch anything, unlike the other four lucky fishermen on that stretch on the San in Postowa. Josef Hanak (Czech 2) won on this venue with 2 fish. So even if Dan caught something on the lake, he had lost his chance of a medal.

The lake was a real problem, you needed lots of luck to catch anything. David Seba caught a fish, but it was 2 centimetres short of the minimum. If it had measured he would have secured the 11th place, in the sector and our team score would have been much better. Davids prayed for catch did not measure by those vital 20 cm and so the Czech competitor was given 19 "penalty" points for a blank card. And because our competitor Milan Pavlik blanked there also, it meant that the total score after five rounds was that the Polish B-team were ahead of the Czech 1. The Polish competitors were 4 points better in the total sum of placings. In the last competition on the lake only two trout were caught and the happy competitors were Lukasz Ostafin (Poland 2) and the young Frenchman Guilpain.

In the individual competition, where Lukas Pazdernik was fighting for gold against all the members of the Polish team, it was very interesting. Lukas supported by Olda Dvorak and David Seba. Lukas won the first competition on the San in the "catch and release" stretch with 15 fish, and in the second round on the reservoir Myczkowce he took the lead with two fish. After the first day he was in front of D. Seba, who was chasing having a sum of two placings. In the third round Lukas was fifth on the Solinka (5 fish), whilst David was on the San in the "catch and release" stretch and nineth with 8 fish.

At this moment the famous Polish competitor, and also unlucky not to win "Silver" last year in the World Championships in Slovakia Kazimierz Szymala, took the lead, because his score was two places better than Lukas. The Czech competitor from Strakonice (South Bohemia), however wiped out this this small loss in the fourth round and both competitors had the same sum of placings 10. The Pole however caught more fish. David was unfortunately blank on the lake, and he was eliminated from the list of potential medal winners. Those who remained were Lukas and three Polish competitors, Szymala leading, with Ostafin third and Lach fourth. 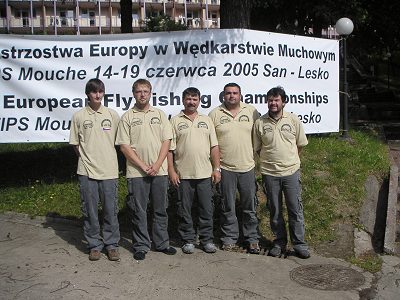 The last and fifth round on Sunday morning saw Lukas being carefully watched, because Szymala and Ostafin went of fish on the lake, where the fishing was generally bad. At the end of the session only two fish had been caught. Ostafin was first and Szymala with 19 points dropped to the bottom. Jozef Lach was fishing on the San in the famous "catch and release" section and caught 8 fish which was enough for fifth place and he ensured the bronze medal for himself. In this group the Czech competitor Olda Dvorak fought well, and with 16 fish he had a score of two and this lifted him to a fantastic fifth place. This was probably the last performance in the Czech Team for Olda and by coincidence this was also his best score in any of the top fly fishing competitions.

Every body was interested in the performance of Lucas Pazdernik on the San in Postowa, because only the best score had earned him last year's Gold in the European Championships in Sweden. Here he was fishing in a great style and in three hours he had caught six fish, which was the second place in the sector and a total placings of 12. This number of points was just enough to give him a second gold medal! This was an almost unbelievable success and I can only remember the French competitor Pascal Cognard who won the World Championships three times, and the Englishman Brian Leadbetter who won two World Championship Gold Medals. In the European Championships this was a first occasion.

The Poles had six competitors among the first ten, Czechs had two with one from France (8 Guilpain) and Italy (10 Dona). The next Czech placings were as follows 14 D. Seba, 19 M. Pavlik, 21 J. Hanak, 22 M. Susil, 23 D. Svrek, 26 D. Fanta, 29 L. Rosa, 47 J. Pecina. Altogether there were 94 competitors classified. This years European Championships in Poland were very well organised, only high water in some places had an influence on some stretches, and the lake fishing was a problem. We can now enjoy the fact that the fly fishermen from the Czech Republic have shown themselves as very good in that they were again amongst the best fishermen on the fly fishing stage. They have made a good mark on the European Championships.

Concerning flies and the ways of fishing, the short nymph with a relatively small goldhead patterns or larger streamers with natural patterns worked. Fish could also be caught with small dry flies as well as sedges and small upwings. On the lake the best advice would have been equal to gold. Small nymphs fished up to one metre under the surface worked. The best advice was to find the sunken trees and stumps, this was were the trout lay hidden. It is possible to quote Jan Pecina who, was not lucky on the river, normally his strong point. This time he blanked twice! For CZN readers we will bring the fly patterns which were used by David Seba. 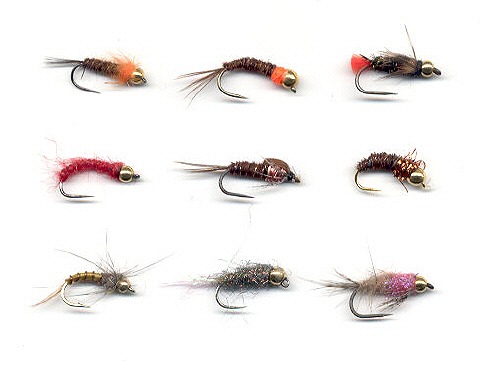