Competitors Roman Jörka, Ondrej Misar, Vit Pavlacky, Jaroslav Masek and Petr Drasdik were nominated to this year´s 5th Championship of Youth in Portugal for the team of the Czech Republic. This was a strong team, which I believed in from its start. The competitors had their camp, just before the championship in Slovakia, under the supervision of Milan Cubík, who was the team manager. We have also tested new fly fishing lines, which were bought by our sponsor company Veolia. This was a transparent floating line, which was good for Portugese waters.

Our team met in Plzen on 18 June in the evening, incl. the driver Kamil, who supported all our team very well. We went through Germany to France and in the evening the next day we accommodated ourselves in Bordeaux in a Formule 1 hotel. The next day we were on the way from six in the morning to get to Moncao in Portugal. Here we settled ourselves in a hidden little hotel, which was managed by two 70-year old ladies.

The next morning Roman woke up with a common cold, accompanied with high temperature and both grandmothers helped us to manage this unexpected problem. They helped to recover our boy in three days. However, in between we were training and we were trying to catch some trout.

The first venue was the Rio Gadanha, which looked both on the map and the photos quite good. After our arrival at the stream, we thought that the organizers were making fun of us. My jaw fell together with the other, I watched and wondered. In the river there was a flow of about fifty litres per second. From the bridge some fish could be seen, but these were not trout and after a long time I saw one scared rainbow of about 20 cm. How confused it was sailing in the hole under the bridge. Our fishermen‘s amazement could not be disguised. However we got dressed quickly and went for it.

Kamil and I we were trying the long stretch upstream of the weir, with still water and others under Vit´s coaching were trying to fish in the little streams downstream of the weir. We had a meeting after two hours of fishing and the boys were very upset. They had managed one eligible trout in a small pool and that happy man was Jaroslav. However, we succeeded upstream of the weir and caught many trout over the limit, which would had been set for 18 cm for this championship.

We set out for another river and this was the Rio Mouro, the same size as our breeding trout capillary brooks. And there were just two marked stretches, upper and lower! The water flow would have been be about 100 litres per second, but it was heavily scrubby in some places. Banks were furthermore covered with plants with thick thorns like our wild blackberries. We saw again some trout and again barbel and chub. Neither after a drive of 50 km we were able to find any training stretch. 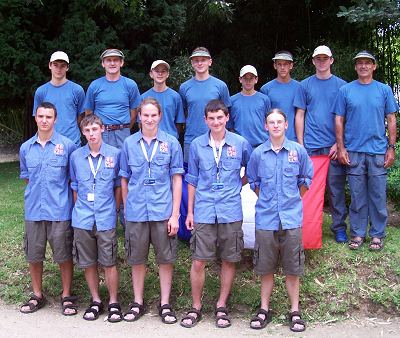 We were crossing the last river then and this should have been larger and it evoked our hopes, even if at the distance of 70 km. Its name was Rio Caro and even here there should have been two venues. We stopped on the bridge in the upper part of those at number three and we were getting calmer. In the river there was a bit more water, it was wider and more open and finally there were also some trout to be seen! We were going to see the lower venue, there are streams and also many trout.

The next day we were going to practice on the Rio Caro. Watch out treachery! Our training stretch looked completely different to the competition one. We were meeting the Italians and old friends from France, who had been our biggest rivals. We found a hidden place downstream of the venue and started again. There were only barbel and chub. We were fishing in the French way, with the intermediate line and nymphs with a small tungsten beads, but we caught only one trout and one more really a little one. The only thing we found out was that local trout love doughnuts and so we fed them from the bridge.

The following day we moved to the official hotel, where we spent the rest of the championship. In the afternoon there was the official opening, and ten participating teams were in the parade through the town and there were also long speeches in the horrible heat. They played the anthems and for the Czech team they played that Czechoslovakian one together with the Slovak part.

The next day in the morning we spent with tying and we sent two competitors for the official training to the venues 2 and 3. On the training there were many people, venues were short and heavily scrubby. There were only few fish and very shy. Our guys finally succeeded and they caught something, but I know that the most important thing was the lucky draw.

We believed in our flies and so the next training we missed and we spent our time tying sedges and grasshoppers and we were preparing for the competition. This was mainly in the preparation of tips. Everybody had to have at least five of them, because there were lots of lost ones. If all our guys caught one fish in each competition, we would be the champions. This was my guess for this championship.

In the afternoon we went fishing below the hotel, where there was the beautiful river, the Rio Nino. It was full of barbel, and so we caught a couple of them and we kept in a really good mood for the next day. In the evening there was a draw, we glimpsed at the next day´s draw and we went to sleep.

The coaches were small so we could not travel with the competitors. I drove to see Petr on the Rio Caro and I found only numbers 7 and 8, but our boy should have been on the no.10. We asked the organizers and they sent the policeman on a motorbike. We were driving behind him for an incredible 35 km and suddenly we were on the place. There was a quarry and below the quarry there was a stream and in it, there was our Petr!

I had been creeping behind him and I found out that he had not caught anything yet, except a few barbel. Then he got into a very promising part, where there must have been something! Suddenly I saw a wild attack by a trout on the upper dry fly and Petr struck, but without success and trout escaped. Hopefully, there was not the only one, I thought for myself. Petr casted again and he caught another trout, of 17.8 cm.

He was going in the water and after 20 metres he struck again and nothing again. Petr only shook his head without understanding. Another cast, strike again and the rod was bent and the left hand lifted the net, there was a black trout with large spots. I was jumping over the stones and fell down to see the measuring on time. It was 25 cm and Petr managed to keep one task at least. His stretch did not look too bad and possibly, he would get something. I wasted time in here, because the bank was bushy with thorns, so much that I could not walk along it.

We went to the pub and we were waiting for the arrival of the competitors. The boys arrived and each Czech had a fish, Petr finally had four and he was the second in his group. It looked well, because the French were blank once. After my long time experience I knew that the black day was ahead of us.

In the afternoon we were trying to find our competitor without success and so we returned to the hotel and we were waiting for the arrival of coaches. On the stretches one and two we caught a fish, but then it came, Petr had brought the first “zero“. Guys from the stretches 4 and 5 were smiling, simple, they took it easy because they both had one. After two rounds we were second with the difference of 12 placings behind France and then there were French, Spanish, Portugese and with a small loss the team of the USA.

The next day there was only a morning competition and I knew that the worst was only to have come. Jaroslav was doing very well and also Roman was doing well. Both were on the front positions in the individuals. All team coaches were waiting in front of the restaurant for the arrival of the coaches. Roman had just arrived, but it was really perfect, first in the group! Also Jaroslav was smiling, he was surely second and Petr does not know, but he had two trout. On the phone we learned that Ondra had been blank and the Czechs had the fish. In the score it did not change much. 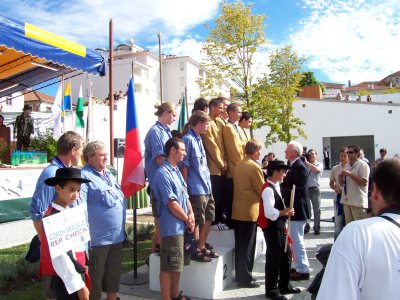 In the last day of the championship, there were two rounds again and it was decided. Milan Cubík went to Jarda, who was currently third to support him psychologically, because he was not allowed to talk to him during competition. I went to Ondra, who had a very difficult stretch. After an hour of searching in the blackberry bush, I finally found him. He was satisfied, he liked the stretch and he had 4 trout in minutes and during a moment he caught another one and was the first in the sector. In this round we had only one “zero“, but Jaroslav, on a very bad place, had one fish and this fish was enough for the third place in the group.

After lunch I went to see Petr, who now had a very difficult place. In the first round 10 fish were caught in here and then there were three blanks. This was my first competition, where I could walk on the bank with our guy in all his stretch. Before Petr got dressed and prepared the flies, I found two trout, but they were already outside the limits of his stretch.

After an hour without a fish I drove him to the lower border and before the judge got here, we had a trout in the net. It was 23 cm long and five minutes before the end we had the second on the dry fly and this time in the upper part of the sector, but both were good! After the finish of the round all had fallen off us, medal score in the teams and also individuals would not have changed much. On the phone I found that Ondra was blank again, but other ones had the fish again.

Ten times I started in the senior competition of the World Championship, three times I coached the youth, but never were there venues as difficult as this time and nowhere was it so difficult to catch a fish like in Portugal, only on the lakes in Ireland at the World Championship. Well, now I would like to thank all competitors for the silver medals and also to Milan with Kamil and I congratulate Jaroslav on the bronze medal. Guys, it was great!