The XVII. European Fly Fishing Championship was held in Forde vicinity found in Sun Fjord. The Norwegian organisers picked waters with occurence of the brown trout and all tactics could be focused on this only fish. Alltogether 16 men's teams and one women's team (England 2) and also 3 individuals from Bulgaria and Romania were accredited. We also first saw Hungarian participants here. Apart from the local Norwegians, the Czechs, Polish and the already-mentioned English had two teams each.

The Czech A team didn't start badly – they were third in the first period, won the second round with a big lead and in the third period they tightly kept the lead. The other Czech B team, however, started on the tenth position and gradually proceeded up just to finish seventh after three rounds. The breakpoint came in the fourth period where the Czech A-team got an exceptionally bad draw and finished fifteenth in this round while the B-team moved up to the sixth bar in preliminary results - right after the first Czech team which dropped down here after the unfortunate first round.

In the last period of the championship both Czech teams fought hard and moved forward. The B-team, with addition of their score (183), took the third bar and the A-team finished fourth (184). There was one-point difference between them, but the final results could have been turned by only one milimeter. The winner was Italy (162) and England finished second (174). The team of France which brought up highest expectations as it had a lot of world champions within their members finished as low as the seventh bar (191), the Slovaks were twelveth (248), the Hungarians fifteenth (306) and the English ladies finished last. Paradoxically, the Portuguese Jorge Pisco (20), whose team took the forteenth place, became the 17th European champion and it was the first Portuguese medal in the category of adults in history. 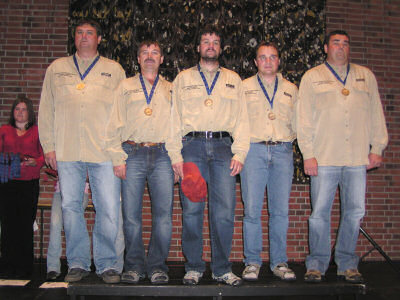 The English Ian Barr (23), best in still waters, finished second having fully taken the advantage of the fact that three times the catching took place on lake. The bronze medal went to the local representative Paal Andersen (24) from the team Norway 2. In my opinion it's also historically the first Norwegian medal in a big international contest. The “potatoe“ medal remained for the captain of the Czech B-team Jan Pecina (25) who this time didn't manage to enrich his collection of two bronze medals (World Championship and European Championship).

The positions of other Czech representatives was as follows: 7th Igor Slavik, 14th Martin Susil, 24th Frantisek Hanak, 26th Pavel Chyba, 29th Rostislav Kriz, 33rd Pavel Machan, 34th Vladimir Sedivy, 39th Dan Svrcek, 60th Josef Hanak. Altogether 89 individuals took part. As seen from the results, even this time the fortune in drawing was decisive. The Czech racers won in their group many times just to drop down to zero next time. Even despite of all of this, it is possible to assess the performance of both of the teams highly, especially in comparison with the result reached by the all-star team of France led by Pascal Cognard himself.