This interview with František Hanák, who won the famous international river competition, the Welsh Dee International Grayling Championship in late November, was conducted by Karel Křivanec.

CZN: It's becoming a tradition that, at the end of November, you travel to Wales to compete in the Grayling Festival. How did it compare, this year, with previous competitions?

FH: This was the third occasion, in the last four years, that I have participated. In 2005, 2006 and 2007 the competition was almost cancelled due to high water. We face this potential problem every year but, as I travel to the UK on business, it not as much of a risk or a disappointment to me if the championship is cancelled as it is for those who travel there purely to compete.

CZN: How did you find the 2008 competition? I have heard that conditions were the best they had been in a long time.

FH: Well, this time the weather was better even if the water was a bit higher. That said, all the water was fishable so it made for an excellent competition. I took a decision to arrive two days before the start of the competition to practise and it paid off. On the day I arrived, Thursday, I had an extraordinary piece of luck and, upstream of Llangollen in Lower Dipper pool, I managed to catch a 72 cm salmon.

CZN: Tell us about it!

FH: I was practising with Gary Hedges from our team and he took me there. There was a strong current against our bank, but, being tall I managed to wade to the middle of the river where there was a sandbar that ended in a deep hole. On my fourth cast, I realized that I had hooked a bigger than normal fish and, at first, I hoped that it might be a record grayling. A few seconds later the fish shot away, stripping line from my reel and I realised that this was no grayling! I was testing our new four-piece, Hanak Competition, French Nymphing fly rod, a 10 foot, 3-weight rod which is built more for delicate presentation than fish-fighting ability! I was also using a leader made with our HC 0.16 mm fluorocarbon and a fly tied on Hanak Competition HC 300 #8 barbless hook.

CZN: How did you manage to subdue a fish of that size on such light tackle?

FH: After about five minutes of a tough fight I saw a big fish, flapping and twisting along its body axis. Fortunately, it had taken the top dropper and had broken off both lower nymphs. I had to concentrate hard and not lift the rod tip too high to avoid over-stressing the rod. After about ten minutes I managed to land the fish and it was a 72 cm salmon. Judging from the photograph, it was a male that had long since spawned and this might be the reason why I was able to land it on such delicate tackle. It took a Rainbow Handsome Bobesh, listed as number 71 in your book, Czech Nymph and Other Related Fishing Methods. The following day Gary also hooked a salmon but, in his case, the fish won!

CZN: How did you fare in the first practice session?

FH: It was very successful, probably because there were no other anglers. The session enabled me to define and clarify my tactics. I caught 15 grayling, the largest 42 cm and two of 309 cm. As there were no rising fish, I concentrated exclusively on nymphs. On the top dropper I had a tungsten gold bead Rainbow Handsome Bobesh tied on a #12 Hanak Competition 400 jig hook and I experimented with other nymphs on the middle dropper and on the point. My leader setup started with an 8 foot Airflo polyleader followed by an indicator and a two-metre fluorocarbon tippet with the three nymphs spaced 50 cm apart.

CZN: I gather the Friday practice session was less successful?

FH: Yes. The problem was that a large group of fly fishers arrived and there was not much space for training. Despite this I caught about 10 fish and this gave me the confidence I needed in my tactics for the competition.

CZN: How was the competition organized and how did you finish on Saturday?

FH: It is a competition of three-member teams and individuals. Two competitors fish one long beat and the third checks the neighboring team. There are three periods in total and everybody goes fishing twice and checks once. Only grayling were eligible with a minimum size of 20cm. There were 18 teams in total and three venues with six teams each. On Saturday I was fishing with Karl Humphries and our third member, Gary Hedges, was checking. Our beat was C 6, a long right handed curve and at the end of the beat there were many shrubs in water. I caught 11 grayling and Karl caught two which was sufficient to earn him third place in this sector. The next two teams only caught a single grayling each. My largest grayling was 39 cms. In the afternoon we finished in third place – I was checking ? and Karl caught three fish and Gary one.

CZN: Sunday, 30 November was the final and deciding day of the competition – how did you fare?

FH: The flow and clarity of the water was still good. Gary and I fished beat B – 4 which curved to the left with the salmon pool in the middle of the beat. It proved difficult to read. Gold heads did not work well and so I used another jig with a black nickel tungsten bead. I finally caught nine fish and Gary had two, which was enough to give us victory on the day and win our team an overall fourth place in the competition. The team prize was won by Martin, Phil and Mike Dixon of England.

CZN: And the results in the individual competition?

FH: I was the winner with 20 grayling, second was Phil Dixon (18 fish), (you fished his lake last year) and the well-known English fly fisher, Bob Worts, was third. The competition had a good international component with two competitors from Italy, two from Bulgaria and one from Poland. The biggest grayling was caught, 47 cm, was caught by Ian Jones of Wales.

CZN: In summary, it seems that the competition was a triumph for the Czech nymph method and Hanák Competition tackle. Congratulations and thank you for the interview. 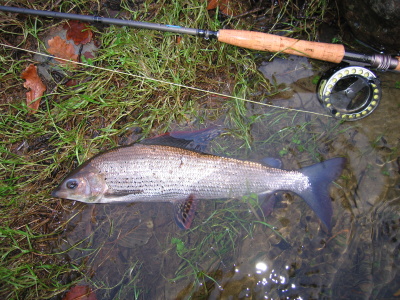 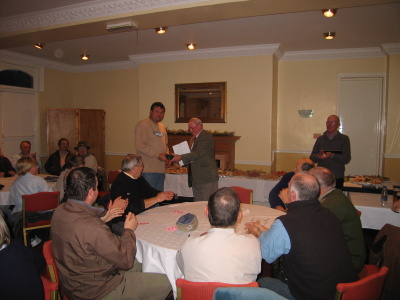