The morning departure from Pongola brought a surprise, when our host, Korrie Broos, lost his way in the hunting park and we had a free trip into the wilderness. At one moment on the dusty path we saw two dark-brown heads of cabbage which changed into elephants' feces, 2 hours old as our guide claimed after examining them with a stick. Elephants after all, though indirectly!

After an hour of rambling we found a spot with mobile reception and then the rangers led us to the right gate where a native Zulu sold nice souvenirs. Obviously we took the chance to buy something because there were no shops in the wilderness. We also bought some postcards which arrived more than a month later after our return. We had no chance to buy stamps and no postbox was around. We asked one of the participants to send it for us, but he mislaid it and in the end Jiri had to urge him to do as he had promised and the postcards arrived home a week later.

We finally got on an asphalt road to Johannesburg and went for about five hours through a rolling countryside. About one hour before the city Korrie turned somewhere into pastures, and on a dirty, dusty path and then a wet meadow we continued for about two kilometers to get to a densily overgrown pond. We had one hour to catch black bass and then we had to go on.

The pond looked quite uninviting and the inner side of the dam was strenghtened with tethered tyres from which we casted. It was nothing pleasant. Jirka had pulled out three basses in an eyewink. I also scored, but all fish were about 30 cm. Suddenly I had a take on a big fish streamer, I striked and a black bass, almost a half a meter long, jumped above the water and disappeared. We pulled out some more standard-sized fish and had to leave. Pity, we could have caught something really interesting there.

In Johannesburg we changed our little car for a bigger one, obviously a Hyunday again, and at the dusk we set off for Pochestroom. Even though it isn't too far, we hit a traffic jam on a six-lane expressway in Johannesburg suburbs and moved for two hours at the speed of a pedestrian. Black Africans who didn't want to wait would pass by in old cars on the service lane for the ambulance and police, risking a crash into their fellows' carriages parked unlit at the side of the road.

After 8 p.m. we arrived in heavy rain at Korry sister's, who lived here with her dauhgter and son in a single-storey house equipped with a sophisticated electronic security system. Being barely forty she was already a double widow. This short break on the way was for us to have a very good dinner. Korrie could hold without food for quite a long time and he somehow assumed this quality with us too. Jiri pretended he didn't mind, but I wasn't happy at all and this was also the only negative feature of our otherwise excellent host. There still was his never-ending characteristic joking, but we got used to it quite soon as he made fun of himself a lot too. 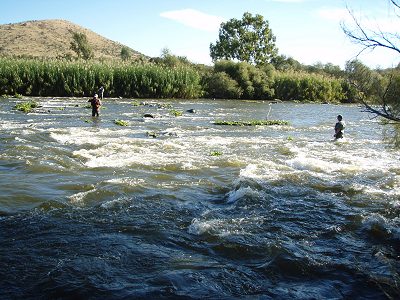 We still had some twenty-five kilometers ahead to get to a camp on the Vaal river where another weekend Master Class on the Czech nymph was to be held. The camp called Elgro Lodge was right on the river bank and we arrived there in total dark at about ten. We quickly accommodated in typical bungalows with two bedrooms, a kitchen, a roofed porch and a bathroom. Korrie brought from his supplies more Sauvignon Blanc, a South-African wine whose nettle and black elderberry aroma accompanied us during our April nymphing expedition to South Africa.

In the morning, Korrie woke us at five and right after that he led me to the river which lazily ran through pools near the camp just to fall into long rapids. When I came to the river, a hundred-head flock of cormorants rose from the trees. A couple of the boldest ones kept hunting without letting themselves get disturbed by our presence.

We had great Rooy Bos tea - a boast of this country, for breakfast and we also had to praise it loudly to satisfy Korrie. White South-Africans are patriots and as all good patriots they want to hear compliments on their country. When we were in New Zealand some time ago, everything was also the biggest and the best, however at least only on the south hemisphere.

We got up so early because a friend of Korrie's, member of the South-African flyfishing team was supposed to arrive. He was to take us to a special place, but something happened to his car, so he arrived at about eight. We went to a shallow place under the rapids where we expected goat-fish, called yellow fish here. This fish is exceptionally suitable for catching on the Czech nymph, which is the main catching method on the Vaal.

I was quite curious because all participants of the previous workshop had warned us that our arms would get really toilworn from pulling the big fish. After three hours of catching Jiri had one 25-cm barbel and I pulled out a 10-cm yearling. The native anglers remained without a quarry.

The sun was really hot, so I wrapped up and went to bed as I didn't think the theory about cold water which the locals had mentioned was right. In my opinion our bad success was caused by the cormorants. But our morning failure was because of wrong selection of the spot - the yellow fish simply wasn't found here.

I was also pretty hungry and wanted to boil a couple of eggs. During cooking I smelled gas, so I began looking for the leakage with a burning match. The burners were in order, but when I opened the oven I was literally scorched like from a flame gun. Fortunately I only burnt some hair, eyebrows and some hairs on my arms and chest.

I stayed in the cool of our room till half past three. It seemed strange to me that the others hadn't returned yet, so I set out for the river. They were standing in the middle of the rapids pulling a nice fish every now and then, which made me try it too. I waded on the upper edge of the rapids, catching in spots where I expected the fish. It was all pointless so after half an hour without a success.

I walked down along the bank into the middle of the rapids and casted in a deep eye near a rock. I led the nymph through the deep water a couple of times, but nothing happened. Then in the middle of the drift I raised the tip of the rod and suddenly a big fish tossed in the water and disappeared. The same repeated after the next cast and raise. Our catchers had moved under the upper edge and remained without a catch too, so they gave it up at about five and went to refresh themselves a little with tea.

Before six Jiri tried the beginning of the pool near the camp and caught a couple of nice yellow barbels under the water on a sedge pupa. The dusk came quickly and the fish didn't react to the nymhps anymore. The sunset in this part of Africa is very quick and it gets dark in half an hour. We got out of the water and went to our bungalow where Korrie's sister with children had already been preparing some grilled meat. Of course, it was a South-African specialty and we also weren't short of our favourite brand of white wine.

Next morning, Friday 20th April, I went to the end of the upper rapids which finished in the pool near the camp. A number of water hyacinths were floating on the water, which made the fishing much harder. It was a result of Wednesday's night heavy rain which raised the level of the Vaal so much that chunks of these plants began to tear off from the bank parts of the river. The water hyacinth is now a big problem in this part of South Africa. Some lover of the nature seeded it in the river and the disaster came right away.

I started nymphing in a small wake under the rapids and five minutes later I had a two-kilo yellow fish on my rod. Even in this case I felt no take. I played with it for a while, but it gave in in the end. I waded in the current under the rapids and started to lead golden-headed nymphs with a distinctly green tip. Soon another fish came and stripped my 0.20 mm fluorcarbone line, so I changed for a 0.25 mm fluorcarbone Fulling Mill leader and that was something these fighter fish couldn't get over.

When I registered another fish on rod, I only thrusted the tip of my 5 size Sage rod into the water and kept the quarry in the current some 4 metres away long enough until the yellow barbel had got exhausted. It took about five minutes, but it was highly effective. Only once a big chunk of hyacinths tangled with my line, so I had to loosen a little and lost the fish. I managed to get the fish out of a few smaller chunks and kept the fish head against the current. It was a really nice fishing and I didn't mind the fact I couldn't feel the take and only caught the fish by raising the rod.

The first participants began to arrive in the afternoon and by the evening 34 of them had come. They were anglers from the Johannesburg metropolitan area and they caught barbels on the Vaal. Besides ordinary flyfishers there were also some racers and two candidates for the national represantation team. This course met a high interest from the South-Africans who learnt something about short-nymphing and tying various types of nymphs. We showed a video from junior championship in Rozmberk and a Japanese video from the World Championship in Slovakia. Jiri excelled on the water a couple of times and everybody just clapped their eyes in astonishment.

On Sunday evening the camp co-owner took us a few kilometers down along the river where a big mouth yellow fish was to be found. This fish is a predator in the region. It grows up to 12 kg and feeds exclusively on smaller fish, so it's caught on streamers. Unfortunately we only saw it in photos and so we had to put up with small mouth yellow fish caught our way on "Bobeshes". Jiri caught a plenty of them, I had four - the biggest may have had about 2.5 kg, a local angler had one and Korrie caught nothing. In the evening we celebrated the course with our favourite vintage and in the morning we went on. A flight from Johannesburg to Cape Town awaited us - and our last week in South Africa.