It was Thursday, 7th October and nice weather of late Indian summer pushed me to consider a short trip to the river. After lunch I made my decision and before one o’clock I was driving from Ceske Budejovice direction Sumava mountains. I was in hurry and drove through the Prachatice town but it was a mistake. There was a detour there, badly marked on small country roads. I had to pass the Libin hill and returned to the Prachatice road close to Libinske Sedlo. In a while I crossed the pontoon bridge over the Blanice river. Residuals of stony bridge turned down by floods were still there. Beautiful parkway with nice old trees along the road to Volary was broken down to make space for a new wide road. I had to admit that final result of the road constructor’s work was not so bad.

Close to the pub in Dobra I slowed down to satisfy the famous dog, I drove through the village and stopped on the halfway before the railway station. To choose the right location was always big problem for me. I walked on the deer pass to the river not to break the rule of National park where is allowed to walk only on marked roads. Deer passes are many there but they are not really marked. I was in about half a way when a big black hen flew up with big noise. Just couple meters from me and I was able to watch ponderous flight of heat cock.

Vltava river I reached at about two o’clock and I could wait for first small circles. Weather was sunny, just couple little clods showed up. Wind was pretty strong and that’s why it was not very good opportunity to fish with 2-sized rod and the same fly fishing line which I took today. On the road behind woods was pretty calm but here in the valley the wind was stronger. I started to walk against the water stream but after one hundred meters I changed my mind and started to walk with the wind direction and with water stream.

Below small shallow pool were graylings in the fast stream and they seamed to be interested in upwings which were floating with a wind on the water surface. My fly was floating as well. It should be totally wrong according to all fishing books but graylings wanted just this and they were attacking small duns ploughing in wind more than other flies floating just freely.

It was one sort of fish there, about 35 cm and some 30 and smaller. At the beginning of the pool I found 38 cm long grayling but I messed up the first try and all other trials were empty. It was an experienced fish which looked at my new fly and finally just left it alone and disappeared out of my range. Little bit below this site I caught two middle sized graylings and then a long, slow pool started and I had to cross it faster.

I lost some time and I noticed that fish started to appear on the surface. It was about 3 o’clock and it was too early for the end of rising. Though I believed that it should be better, Duns stopped and that was it. Every day here is some kind unique and never repeats. And the same rule can be applied for the selection of suitable flies, you can watch significant changes even during couple hours of one afternoon. Sure that they are some fishermen which use one fly and do not take it away for all autumn because they always over talk some grayling but this is matter of strategy of fishing.

The river here makes curves and it is not easy to find hidden graylings with dry fly, as they are not showing themselves rising. It was not the first time I was there and I tried to stay on known places where I succeeded to catch many 30 cm long graylings many times but that was it. I tried couple colours and kinds of dry flies but still just light Dun worked here. The wind was very unpleasant and gentle rod with light line did not allow me the more precise fishing.

Suddenly I noticed that I was not alone there. Close below me two colour spots were moving. I prefer to be alone while fishing and especially here on upper Vltava river. Nothing I could do about it, I had to accept that we are three here today. I concentrated on my fishing and I succeeded take middle sized grayling time to time. In about half an hour I came closer to the fishing couple sitting on the bank. Their rods were laying in the direction to the pool and I did not know who they were.

My question what they are fishing and how is it going they replied shortly: “We are watching professionals”. Such a compliment I never got and just their young age was apologizing them because I am not a real professional. Maybe they thought that I was because I had some catches while they were without any. This was caused by years of experience and better equipment. After thirty years with fly I can deal even with such a warm and windy day.

I walked around both observers and continued in the direction to the railway bridge though it was not clear if I really reach it. I got a feeling that today it is not worth to continue and I wanted to give up and return. It meant to go home and I did not want to. Other feeling pushed me to go along the river and enjoy just try fishing. It was not an easy decision and I continued walking with wind in my back and was throwing flies to promising places. 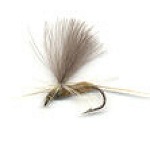 Suddenly I was surprised with something. It was not a big fish, neither a stag nor lonely elk. Just a little pool surprised me as it appeared suddenly. Fast stream ended under the tree in the deep pool at the right river bank and followed by a shallow and long pool. It looked exactly the same like the one which was destroyed by the floods 2 years ago, half kilometer far away. The river just created again the one which was destroyed at the other place before!

I was so happy to see the pool that I walked around in big circle so carefully on my tiptoes not to disturb the new inhabitants. Sometimes I would like to come for graylings there but now I was just happy with the fact that the pool was back here again. I walked in the river in the top spirit and stopped on a shallow plain where I told this big news and for it I got couple bigger graylings and some little fish.

I thought I could not expect more because it was after five o’clock already and it is usually end of fishing in fall. Graylings stopped to show up and their attacks to duns were weaker and weaker. I got about five hundred meters up the railway bridge. It was almost quarter to six and again I was deciding if to stop or not. Suddenly I got a crazy idea that I have not try the Olive Dun yet. So I looked into my fly box with dry flies and pulled the Dark Olive Paraschut size 20 out.

Wind stopped blowing but it was still warm and still clear enough to see. I landed the dun on the water surface close the place where pool was ending and a big 35 sized grayling took it rising with elegant rise. I was so surprised that I missed the right time necessary for the right catch. Fish was surprised like me when something pulled it out of water. Fish replied with braking and as I did not let it escape with the water stream, went to the deeper water and almost in a minute the fight was over.

Very nice end of the day, I though when I was drying my CDC fly in wonder bowls. Just as a duty I laid it again above the stone in the beginning of stream where water was under knees high. Suddenly my fly disappeared and I could not see it any more. Just to make sure, I lifted the rod. Line did not fly up but was straighten and pulled the top of the gentle rod into a bow.

Now I can really appreciate the finest of the rod which protected to interrupt the end of the line just 0,08 mm in average. The really nice grayling sucked my fly in such a way that no circle appeared. I took him down the stream and released him as well. Then I returned to my original place and got another one. Again just as a try and with the same olive which till this time fish mostly refused.

The stream there slowed down in the pool where I started week ago and even if it was almost six o’clock, I was here successful again with this tactic. After drying my fly I looked at my watch and it was five minutes after six. This was the right time to finish fishing which probably will ever not repeat.

Those people creating fishing rules should try it some times. Maybe they would listen to the fact that in some countries fishing ends one hour after sunset. I think it is better solution than our simple one. Maybe some problems would appear in the beginning but we should solve like in those other countries.

I was disturbed suddenly with loud click and I saw nice circles made by big grayling. OK, I take this last one and leave, I thought. My excellent fly was flying and landing close but nothing happened. One more try and one more fail. I tried Slavoj’s olive which fish looked at but again empty try. I tried couple more flies and looked at my watch. It was quarter pass six and that was end of time tolerance. I tried one more fly – Dark Quill size 18, laid it on the level and started my way out.

My good intention to leave was stopped by a new circle, right in place where my fly was. I reacted too slowly but the strike was successful! Heavy fish was fighting at the bottom and I got suspicious that it could be the purple heavy fish which I got last Friday. Now, after six days, I got him again!

This was a really nice end of today’s fishing. Couple famous fishing theories were broken today. I never got such a grayling on the dry fly in autumn and so late in the afternoon and I had to admit that until today I thought it was not possible. Even a new circle from another fish did not attract me back because everything has to get to the end and even bad fishing rules should not be broken…