The very same team which won the World Champion trophy last year both in teams and individuals (Luboš Roza) was nominated for this year´s senior World Fly Fishing Championship in Bosnia and Herzegovina. The team was very experienced including the young predators - Luboš Roza, Pavel Chyba, David Chlumský, Antonin Pešek and Tomáš Cieslar. The Team Coach was Tomáš Starýchfojtů and I was the Team Manager. With respect to very successful previous years, when the Czech team was dominant at the home World Championship in Frymburk and last year completed the hattrick, therefore also this year´s expectations were high. 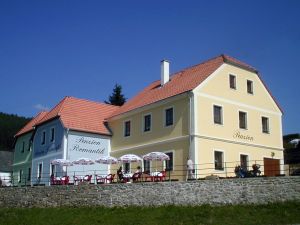 We are offering a nice guest house for sale. In 2000 newly-built guest house in a historic and picturesque South-Bohemian village of Rožmberk nad Vltavou, Czech Republic. It is located near Austrian and German borders.

In the guest house, you find 10 double-rooms, 2 three-bedded rooms and 1 suite. In the building there is also a 3-roomed flat, minibar and dining room, kitchen with background and a terrace with a great view of the medieval castle.

The place is famous among fly fishermen due to the famous Vltava River, which is a few meters far. About 20 km from the place, you find the Lipno reservoir. In the near proximity of the village, there is also a great hunting area. Beautiful nature, rich history, great sightseeing including the town of Český Krumlov (25 km to the north).

e-mail: This email address is being protected from spambots. You need JavaScript enabled to view it.

In the middle of April 2015, FIPS-Mouche General Assembly was held in Cancun, Mexico and we expected its results impatiently. It took a long time before we received the minutes, but now we have got them at disposal and all seems to be clear. We can assume why also the ex-president J. Kowalski was present in the Board (he submitted a proposal to update the draw program), however, the trip to Mexico he probably did not pay from his own pocket. There were three applicants for a vacant position of the General Secretary and an expected winner was Paul Bourqe from the US. His presence in the Board must be welcomed, because his minutes are of a high quality compared to nothing-to-say minutes from the past. Hopefully, he will be brave enough and will find courage to publish also a “secret” financial report, which is traditionally mentioned in the only line.

Read more: Changes in competition rules after the General Assembly FIPS-MOU in Mexico